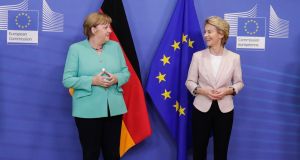 Angela Merkel has urged her fellow EU leaders to make compromises to secure a swift deal on a recovery fund designed to help the bloc overcome the economic damage inflicted by the coronavirus pandemic, as countries clash over the conditions attached to receiving the aid.

Germany’s chancellor, who holds the rotating presidency of the EU, told the European Parliament on Wednesday that the continent had seen “huge economic upheaval” and could not afford to “waste any time” in arguing over the plans put forward by Brussels to reignite the economies badly hit by Covid-19-related restrictions.

“This is an extraordinary situation unprecedented in the history of the European Union,” she said. “I hope that we will reach an agreement before the summer recess – we will need to see much compromise on all sides.”

Ms Merkel pointed out that the planned “recovery and resilience facility”, to be financed through borrowing on the capital markets, drew inspiration from Franco-German proposals.

EU leaders will have to bridge deep divisions if they are to achieve a breakthrough next week when they hold their first physical summit in five months.

On the table will be proposals from Brussels for a €560 billion fund, €190 billion of further debt issuance to finance other policies, and draft plans for the bloc’s next seven-year budget. All these measures need to be negotiated as a package.

Nations are at loggerheads over the extent to which recovery fund money should be provided in the form of grants rather than loans, and also over the allocation criteria that will determine who receives what – pitting a group of hawkish northern capitals including The Hague against the south and the east.

Another sticking point concerns the level of collective oversight that EU governments should have over the reform plans each member state will submit in return for money.

“Each and every member state has homework to do,” said Ms von der Leyen. “There’s not one member state that has no country-specific recommendations. If we want to come out stronger from this crisis, we must all change for the better.”

But diplomats said that governments had different views over how that link should work and who should police it.

A group of countries, including the Netherlands, Austria, Denmark, Sweden, Finland and others, want the council – the political institution that brings together EU ministers – to have a strong role in approving the national plans, in order to ensure that countries are implementing reforms designed to make the jobs market more flexible and address loss-making state pension systems.

But Spain, Greece and other southern member states that will be among the biggest beneficiaries of the fund want a less-political process, giving more power to the commission to approve the release of money. They also stress the importance of nations choosing their own reform approach and priorities.

On Wednesday, Pedro Sánchez, Spain’s prime minister, played down the extent of the splits, saying that initiatives such as the recovery fund sought to “preserve and strengthen the single market”.

“That certainly benefits some of the countries that seem to be rather reluctant, at least in public, about this common response we are calling for,” he said.

Brussels has insisted that a middle ground can be found. EU budget commissioner Johannes Hahn has said the process of designing the reforms would be a “bottom-up process and not a top-down process”.

Speaking at a webinar hosted by the Financial Times and Bruegel, the Brussels-based economic think tank, on Tuesday, he added that the disbursements of aid should be based on governments fulfilling “certain milestones” – another key demand from richer countries that want the power to sanction non-compliance.

“Everyone will have to place themselves in another’s shoes for a deal to be reached,” Ms Merkel said, adding: “The European Union is facing its biggest challenge ever.”