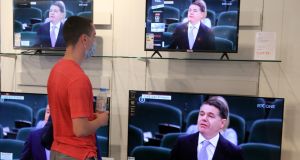 The 2008 financial crisis and its aftermath was configured around a series of contractionary budgets, ones that were viewed as unavoidable but which compounded the economic fallout. We pushed the economy down further than it needed to go.

This time it is different. The Government is attempting to use the most expansionary budget in the State’s history to spend its way out of a crisis. But will it work? That, like most questions these days, is tied into the epidemiology of Covid-19, which we don’t yet understand and therefore cannot predict.

“In the absence of a vaccine, or advancement in therapeutics, the trajectory for the economy is intertwined with that of the virus,” the Department of Finance says in a report on the economic and fiscal outlook for Ireland, published alongside Tuesday’s budget.

Its baseline assumption – dubbed the co-exist assumption – assumes the economy and wider society co-exists with the virus, “with epidemiological peaks and troughs triggering different, phased restrictions, but no full lockdown”.

Something of a bleak outlook in itself. It implies an economic contraction of 2.5 per cent this year, as Minister for Finance Paschal Donohoe has flagged in recent weeks, and a return to positive growth of 1.7 per cent next year.

However, the department’s report also models a more severe scenario involving another lockdown and the persistence of more stringent measures to contain the virus.

Up to €5,000 a week for Covid-hit firms, hospitality VAT rate cut VIEW NOW

“At the end of next year the Irish economy would be approximately 7¼ per cent smaller than it was at end-2019, and facing a long and protracted road to recovery,” the department concludes.

These are big numbers, scary numbers, and they would bring a lot of social and political discord with them.

The department’s baseline, non-severe scenario assumes a no-deal Brexit, which implies tariffs and a big hit for the food sector here. The full ramifications of a no-deal, disorderly Brexit with congestion and logjams at ports and airports is impossible to model, and adds another layer of uncertainty to the outlook.

Borrow more, spend more, support workers and businesses through the crisis. This was the thinking behind Budget 2021. It’s also the national and international consensus, hence Opposition attacks didn’t amount to much.

The Government will face a monumental task exiting many of these additional programmes and spending commitments, but with the economy facing such immediate threats now is the time to keep “the foot on the fiscal accelerator”, as Dermot O’Leary, chief economist at Goodbody Stockbrokers, said.

And the Government is being aided in this regard by the resilience of the tax base – so far income tax receipts are only marginally down on last year because most the impacted workers are in low-paying sectors of the economy, while corporation tax continues to provide a windfall.

This makes the budget deficit and the increase in government debt here modest by international standards. The latest European Central Bank projections suggest that for the euro area as a whole government debt will rise from 84 per cent of GDP at the end of 2019 to 100.7 per cent by end 2020. Ours will remain at around 65 per cent of GDP.

One of the biggest criticisms levelled at the Government’s measures to date has been the untargeted and unsuitable nature of the business supports. Most were in the form of liquidity supports administered by risk-adverse banks and were never going to be accessed by struggling and already in debt SMEs.

Donohoe and McGrath have sought to remedy this with the new Covid-19 Restrictions Support Scheme, which will provide impacted enterprises with €5,000 a week in aid. Combined with the VAT reduction for the tourism and hospitality, this could provide a vital lifeline.

In terms of ambition much of the budgetary measures announced were a continuation of existing supports and programmes, and we may come to regret not using the crisis and the EU’s suspension of its strict spending rules to do something more dynamic in housing and health, areas which never seem to be sufficiently tackled.