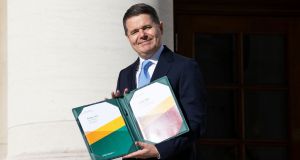 Minister for Finance Paschal Donohoe at Government Buildings in Dublin ahead of announcing the budget. Photograph: Julien Behal Photography/PA

Minister for Finance Paschal Donohoe said he plans to set up an equity fund to invest in “high innovation” Irish companies, in order to boost supports for small- to medium-sized businesses (SME) as they deal with the economic shock caused by Covid-19.

The Minister said that he has given a group of representatives from the Department of Business, Enterprise and Innovation, Enterprise Ireland, Ireland Strategic Investment Fund (ISIF), Europe Investment Bank and European Investment Fund until the middle of next month to come up with proposals on how European funds can be tapped to establish the fund.

“The SME sector requires a range of supports as it recovers from the immediate impact of the pandemic and the accelerated market and technological changes,” Mr Donohoe said in his Budget 2021 speech to the Dáil on Tuesday.

The Government has responded to the coronavirus crisis by measures including the subsidisation of wage bills of businesses hit by the economic implosion, and setting up a €450 million working capital fund and a €2 billion credit guarantee scheme (CSG) for SMEs.

It also earmarked €2 billion for debt and equity investments in larger firms with at least 250 employees or revenues in excess of €50 million through the Ireland Strategic Investment Fund (ISIF).

Companies had only applied for €100 million of CSG loans in the first four weeks after the scheme launched in early September, according to Banking & Payments Federation Ireland. This suggests that businesses are reluctant to take on fresh debt amid heightened economic uncertainty, according to analysts.

A Central Bank paper published earlier this month said that one option available for the State is to provide for equity-like or “conditional grant” injections to SMEs which involve an element of clawback or potential return for taxpayers, lowering the cost of intervention relative to a direct grant.

The paper suggested that this may be preferable to going down the route of the State taking direct equity stakes in businesses as governments do not necessarily have the “expertise or the resources to own and part-direct a wide portfolio of companies in which it has an interest”.

In addition, it said that many private business owners may not want to have the State taking direct stakes in their companies.

Still, ISIF has been an active direct and indirect equity investor in a number of Irish companies since it was set up in 2014 as a follow-on from the National Pensions Reserve Fund.