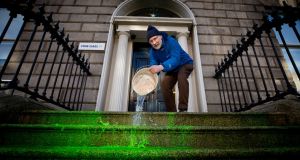 It would be foolish to suggest that Fine Gael was punished by the electorate for failing to act on climate change.

Similarly, the EU fines coming our way for failures in relation to our 2020 emissions and renewable energy targets are unlikely to be too punitive, probably in the region of €150 million.

For nearly a decade, the government has delivered an entirely bogus message of activism on the climate issue while effectively sitting on its hands, a stance linked to the agendas of two of the State’s largest lobby groups – the Irish Farmers’ Association (IFA) and employers’ group Ibec.

A report by not-for-profit organisation CDP on Irish-headquartered companies reporting on their carbon emissions was published on Monday. Among the top performers were listed companies Kingspan, AIB, Kerry Group, Smurfit Kappa and CRH.

There were, however, 25 companies who were asked to respond and didn’t for whatever reason. These included Cairn Homes, Flutter Entertainment (owner of Paddy Power), Permanent TSB and Ryanair.

A key takeaway was that internationally focused companies were more likely to be active on climate issues, while those with a domestic focus were likely to be found wanting.

The number of domestic companies reporting on their carbon emissions was just 31, while the number of multinationals with operations in Ireland reporting totalled 274.

It seems the stance of domestic companies is indistinguishable from that of the Government. Might they perceive, like the Government, that they won’t be punished for failing to act? Maybe this situation is changing. The rise of the Green vote would suggest as much.

Of course, reporting on emissions is far easier than taking meaningful action to curb emissions or restructure contracts around more sustainable business practices. Transparency is good but the focus now needs to be on massive reductions in emissions and it’s not obvious how many of these supposedly good corporates are going to take those tough decisions.