Brexit, the NHS and Britain’s slide into a cultural cesspit

Chris Johns: Instead of rescuing the NHS, Downing Street is consumed by a tribal battle 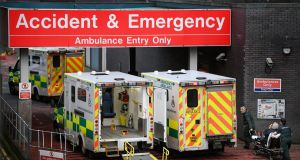 Chris Johns: the NHS is now the only institution that unites the cultural tribes of Britain. Photograph: Jeff J Mitchell/Getty

UK commentators have noticed that the latest import from the Americas is a culture war. For at least 30 years – longer, according to some social historians – the defining fault lines of US politics have become less economic and more identity based.

It used to be that all you needed to know about people was how much money they had. Money could predict a lot about attitudes and beliefs: who you voted for and, more generally, whether you were socially liberal or conservative. Plenty of exceptions existed, of course, but money, or lack of it, was often a good political pointer, if only towards left- or right-wing opinions.

If economics no longer provides quite the political battle ground of old, what does? According to some social anthropologists, everything is now all about identity.

We think of ourselves no longer primarily in terms of our bank balance but more in terms of the tribe we belong to. This might be a case of Darwinism in reverse, evidence that evolution doesn’t always result in progress.

If the United States has rediscovered tribalism and is now exporting it to places like the United Kingdom, there are plenty of residents of Belfast, Kigali or Sarajevo who could be forgiven for thinking that the values of the Enlightenment never really extinguished tribalism in the first place.

It may have been a conceit, but British fondness for tolerance – live and let live – has been replaced with a proud hatred of the other

I guess it’s a way of trying to make sense of a billionaire property developer moving into the White House. Who attracts fanatical devotion as much from unemployed Appalachian coal miners as from hedge-fund traders. A president who passes tax-reform legislation that brings large financial benefits to his businesses yet is praised by most, if not all, Republicans – a party that for years has railed against government borrowing but now thinks an extra trillion or two of debt is neither here nor there.

We always try to categorise; astrology is a good example of our tendency to try to predict and understand human beliefs and behaviours in simplistic terms. But something connects old white men with distrust (or worse) of foreigners; with a fondness for capital punishment; with dislike of experts (let alone intellectuals); with a belief that poverty is entirely the fault of the poor; with a conviction that physical illness is a sign of low morals.

It is to Theresa May’s eternal discredit that she allows her speech-writers to indulge in this kind of nativism. There is now a culture war in the UK that mimics its US counterpart.

The latest manifestation is London’s attempt to coerce universities into accepting one definition of free speech. Posh Oxbridge types are appointing fellow tribe members to a regulatory body that seeks to police a new battlefield: higher education.

The only political energy in evidence is devoted entirely to fighting these irrelevant cultural-cum-tribal battles. Real problems are blithely ignored. It may have been a conceit, but British fondness for tolerance – live and let live – has been replaced with a proud hatred of the other. Disagreement is no longer encouraged or even tolerated: fail to agree and you are denounced as a traitor.

If Brexit is the most visible battle ground of the new culture war, smaller skirmishes are breaking out everywhere. As in the US, unemployed workers from defunct smokestack industries make common cause with deranged billionaires – often, in the case of the British variation of this surreal comedy, with plutocrats neither residents nor citizens of the country they seek to fracture.

The NHS: a problem ignored

The most obvious example of a problem ignored is the NHS. Chronic underfunding and a well-predicted winter crisis have led managers to shut down most routine admissions and procedures for the next few weeks (at least). The NHS is the last institution left standing that unites most Britons.

Unlike the US, the UK retains one national symbol that does not provide fuel for the culture wars. All tribes pay lip tribute to the wonders of a publicly funded health service; most tribes mean what they say. And the British government continues to refuse to provide adequate resources. It’s almost as if they want the NHS to fail.

This is stupid in the extreme. The NHS provided Brexiteers with the highly emotive £350-million-a-week promise of extra funding in the event of a vote to leave the European Union. There is abundant evidence that most people would accept higher taxes for better healthcare.

The electoral implications of leaving the EU are murky: Jeremy Corbyn, the Labour Party leader, is more Europhobic than the current prime minister. But the NHS is the one thing that could assuredly lose the Conservatives the next election. As they allow themselves to be sucked further into the irrelevant cesspit of unending cultural wars, the NHS has entered a state of permanent crisis. That’s a direct consequence of using up all your political capital and energy on one issue.

Brexit has drained the life from the British machinery of government. It is now utterly dysfunctional, unable to focus on, let alone deal with, any issue unrelated to leaving the EU. And that’s not exactly going well either.