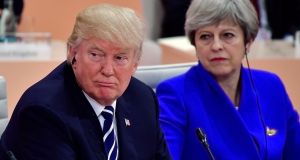 President Donald Trump and British prime minister Theresa May. There is no first family of kleptocrats in Britain so what is driving policy there? Photograph: Getty Images

The head of the US office of government ethics resigned last year, and subsequently described the Trump administration in terms of a ‘kleptocracy’. The subversion of the normal rules of government has led many observers to reach similar conclusions.

Amidst all of the analysis of how Trump played to the most atavistic fears of large sections of the American electorate, there is a fear that he represents little more than a power and money grab for himself, his family and a small cabal of like-minded kleptocrats.

His promises to help those left behind by globalisation and technological change are set against policies – the few that he has been able to enact – that openly favour and enrich the elites that he espouses to despise.

David Frum is a conservative (perhaps even a neo-con) author who once served in the Bush administration. In a recent book about Trump he reminds us that nothing has been done about deregulation, “draining the swamp” or rolling back the state.

Frum’s focus is actually not on these well known broken promises but rather on Trump’s policies aimed at “not deconstructing the state but on breaking the state in order to plunder the state”.

The relatively trivial golf trips, travel expenses and hotel bills (large though they are) are fully documented. But what really interests Frum are the connections he thinks exist with real estate planning permissions in a number of dodgy countries, the Russian cash linked to various corporate ventures, and, more generally, the shady conflicts of interest that are associated not so much with Trump’s family and friends’ wealth but with their massive debts.

Frum asks why did China approve 77 new Trump trademarks in the first six month’s of the new presidency? He cites intellectual property law experts who point out that China never grants approvals like this so expeditiously. Frum suspects many more instances of kleptocratic behaviour.

Frum’s book is interesting not only because it describes in terrifying detail the plunder. He also explains, from that neo-conservative perspective, just why Trump won the election: “Donald Trump succeeded in speaking to and for huge sections of the American electorate that other politicians spoke only about….his hurts, grievances and resentments enabled him to channel theirs. It was fraud, but it was not all fraud.”

Another fraud currently being visited upon the American people are the massive tax cuts recently enacted that hand out the vast bulk of the spoils to corporations and the rich. Another manifestation of kleptocracy but also a very peculiar macroeconomic policy experiment: borrow trillions of dollars to stimulate a fully employed economy. That’s going to have some interesting consequences, few of which are likely to be of much use to the typical Trump voter.

Another author (and FT journalist) Alan Beattie once wrote a book about why America and Argentina are so different. Not so long ago the two economies looked very similar. Both were huge beneficiaries of the first wave of globalisation that was under way in the early years of the last century. Both had abundant natural resources. But the economic path followed by the two nations dramatically diverged. As we know Argentina is now orders of magnitude poorer than the US.

It’s a complicated story but Beattie points the finger firmly at Argentina’s successive generations of kleptocrats and the absence of proper democratic institutions.

And there are plenty of other countries where similar stories have unfolded: where there are a small number of people taking most of the spoils there is wider economic impoverishment. Economic success is not destiny: how countries organise themselves matters greatly. This goes as much for the future as the past.

Exactly the same forces that drove the election of Trump also prompted a small majority of UK voters to vote for Brexit. That Frum explanation of why voters went for Trump is also a good explanation of Brexit. But, thankfully, there is no first family of kleptocrats in Britain. So what is now driving policy there?

If there is a strategy it seems to be that Theresa May wants to stay in office. To do that she has to avoid making any Brexit decisions. When – if – she does decide on Brexit it is hard to see how the Tory party can avoid a split. Avoiding that is more important than the needs of the country. So, let Brexit happen in just over a year’s time and then sort it all out afterwards.

It’s the ultimate version of kicking the can down the road. That there is so much wrong with this, that it is incredibly high risk, goes without saying.

Amongst many gambles, the British are now betting that Leo Varadkar won’t have the bottle to exercise his veto over any deal that involves a hard border. Everyone knows that the “deal” on the Border arrived at last December wasn’t a fudge – it verged on fraudulent.

The view in London is that the EU is going to throw Ireland under a bus. The Brexiteers know full well that leaving the customs union necessitates a hard border and think the Europe will, ultimately, care as much about that as they do.

Ireland is caught between a kleptocracy and an idiocracy. You couldn’t make it up.