First-time buyer mortgage approvals up by 19% in April

Number is down 8.4% on volume approved in March, says Banking & Payments Federation 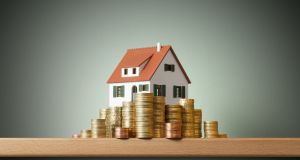 Overall, there were 11.6 per cent fewer mortgages approved in April 2017 compared to the previous month. Photograph: iStockphoto

According to figures released by the Banking & Payments Federation Ireland (BPFI), the 1,819 first-time buyer mortgages approved in April represented a drop of 8.4 per cent on the volume approved in March of this year.

Aside from first-time buyers, the second biggest cohort of lendees were those looking for a “mover purchase”. As with the general trend, the volume of mover purchase mortgage approvals in April dropped by 11.4 per cent on the previous month and increased by 1.9 per cent on the year.

Property purchase accounted for the vast majority of money put towards mortgage approvals. Some €616 million was used for property purchase, with remortgage values rising by 15.2 per cent on the year to €56 million.

The BPFI represents over 70 institutions, including licensed domestic and foreign banks, and institutions operating in the financial marketplace in Ireland.