Retail sales drop of 0.2% on the month in real terms confounds expectations 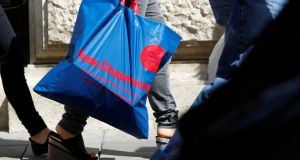 The volatile indicator, which is often subject to revision, showed retail sales dropped by 0.2 per cent on the month in real terms, the Federal Statistics Office said. That confounded forecasts for a 0.2 per cent rise and came after an upwardly revised increase of 0.2 per cent in March.

On the year, shops saw sales decline by 0.9 per cent in April, contrasting with the consensus forecast for a 2.3 per cent increase.

The German economy was for years powered by exports but consumption was a key source of growth last year and is also expected to play an important role this year as traditionally thrifty Germans spend.

They are benefiting from record-high employment, a robust labour market, rising wages and low borrowing rates. The retail sales data comes on the heels of a GfK survey that showed German consumer sentiment at its best in almost 16 years heading into June.

Aviva eyes 2020 dividend cut, explores Europe, Asia options 15:01
Pandemic supports will be removed once effective vaccine is rolled out, Government warns 13:23
Cliff Taylor: Deal or no deal we are now heading for a hard Brexit 13:09
Danish retailer Jysk on track to double Irish store numbers by end of 2021 12:49
Central Bank rules out changes to mortgage rules during pandemic 12:31

1 Admission of mistake in Oxford vaccine dose raises doubts over reliability
2 Karlin Lillington: How I managed to cut my mobile phone bill by at least half
3 Irish Life fund pays €49m for 94 Dalkey apartments
4 Cliff Taylor: Deal or no deal we are now heading for a hard Brexit
5 Central Bank rules out changes to mortgage rules during pandemic
6 Smarter ways to heat your home: Eight of the best modern systems
7 Fiona Reddan: Who’s afraid of Revolut? Not AIB and BOI it seems
8 State may face €1bn in compensation in Covid-19 case, Press Up claims
9 Lahinch Golf Club runs out of its own cash after €3m Covid-19 hit
10 Pandemic supports will be removed once effective vaccine is rolled out, Government warns
Real news has value SUBSCRIBE