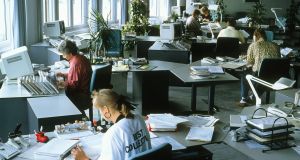 In the boom years, Ireland lost competitiveness relative to its EU neighbours. Wage rates, the price of accommodation, and a range of other domestic costs had risen faster than in our competitors. When the crisis hit in 2008, this cost disadvantage aggravated the loss of output and employment in exporting firms.

However, Ireland has repriced itself: since 2008, there has been a very limited increase in wage rates in Ireland, while in the EU-15 wage rates have risen by around 15 per cent. This has greatly helped the recovery in the economy, with job announcements every week in the export sector.

Over the past nine years, while average earnings for the economy as a whole have shown very little increase, the tax burden on incomes, of necessity rose, in order to correct the collapse in the public finances. As a result, while the cost of living today is rather similar to 2008, many of those at work are less well off than they were at the peak of the boom.

The situation is generally worse for public sector workers as there were pretty dramatic cuts in their earnings. By international standards, the reduction in wage rates in the public service was most unusual. Having got used to relatively high rates of pay in the period to 2008, the adjustment process for the public sector has, as a result, been very painful.

The cuts in public service pay rates played an important role in making the wider economy more competitive. Without pay cuts driving down the cost of public services, taxes would have had to rise even more than they did, thereby putting upward pressure on wage rates elsewhere in the economy.

To deal with these comparability problem, the Economic and Social Research Institute and the Central Statistics Office have used a methodology which takes account of many of the differences in workers’ characteristics in each sector, including in their levels of education and experience. When this method was used for 2003 and 2006, it showed that the premium for working in the public sector had risen from 10 per cent to 25 per cent as a result of the “benchmarking” pay increases.

Analysis using similar methodology suggests a 10 per cent public sector wage premium in Spain over the last decade, but no such premium in France.

As a result of Ireland’s public service pay cuts since 2009, wage rates in the civil service in 2016 were 13 per cent below 2008 levels. In addition, civil servants have to pay a substantial pension levy.

For the public service as a whole, pay rates are down 3 per cent since 2008. Exceptions are the Garda and teachers, where (before taking account of the pension levy), average hourly earnings are slightly above their 2008 level.

The CSO recently replicated its earlier study of comparable public and private sector pay rates, taking account of a range of differences including qualifications and experience. The findings show the public service pay premium in 2014 had fallen to 5 per cent.

If higher public service unionisation rates are built into the model, the premium looks to be more than 10 per cent.

1 Passengers face queuing in car parks at Dublin Airport
2 Major credit union plans to limit savings accounts to €40,000
3 Brother is dragging his heels as executor of uncle’s will - is there anything I can do?
4 Pandemic payment may be tapered based on previous earnings
5 Ten of the most mysterious aircraft disappearances
6 Credit union limit, Penneys stays shut, more stimulus and shopping for Ireland
7 Tesla’s Elon Musk calls for breakup of Amazon in tweet
8 Revenue tells court it was entitled to raise €1.64bn tax assessment against Perrigo
9 Land dispute between Citywest Hotel owner and neighbours before court
10 Nazi-forged fortune creates hidden German billionaire
Real news has value SUBSCRIBE