While Madrid’s banks were sound, its economy was hampered by high unemployment 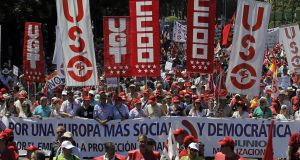 Protesters in Madrid demand the EU change its financial policies to fight unemployment and the financial crisis in 2013, when youth unemployment peaked at 55 per cent. Photograph: Andres Kudacki/AP

Ireland’s economic recovery began in the middle of 2012 and took a number of years before the turnaround came to be fully recognised. This was partly because the return to growth largely manifested itself in rising employment, while those who already had jobs or were retired did not see a significant rise in their incomes.

Spain shared our experience of a property market collapse, together with a major problem with the banking system. Fortunately for Spain, the two big banks proved fundamentally sound, and the cost of their banking crisis to the general public has been much smaller than in the Irish case.

However, Spain’s economy already had a number of major pre-existing problems when the economic crisis hit.

Spain’s exporting and tradable sector was much weaker than Ireland’s. In 2007, the year before the recession began, the Spanish unemployment rate was 7 per cent, but was as high as 18 per cent for under-25s. Its labour market did not work well. Older workers in Spain had an exceptional level of job security by Irish standards, whereas younger workers had an unusual level of insecurity."

As a result, the younger generation in Spain carried a disproportionate share of the cost of the recession. The overall unemployment rate peaked at over a quarter of the labour force. However, for those under 25, it had reached 55 per cent in 2013. Today the youth unemployment rate is still over 40 per cent, while the overall rate has fallen to 18 per cent.

While Spain’s economic recovery is now under way, it still has a long way to go, and is running about a year behind Ireland’s.

As happened here, high youth unemployment in Spain led to significant emigration, but on a much smaller scale than in Ireland, and it has been significantly counterbalanced by continued immigration to Spain.

Over the economic crisis period, almost 5.5 per cent of Spain’s population emigrated, a few coming to Ireland, doubling the number of Spanish people living here. However, net emigration from Spain over this period totalled just 1.2 per cent, under half the Irish level.

The Spanish political system has probably handled the crisis less effectively than Ireland, and as a consequence, their recovery has been slower

In Spain, as in Ireland, the economic collapse necessitated a major reduction in public spending. However, the Spanish political system has probably handled the crisis less effectively than Ireland, and as a consequence, their recovery has been slower.

In Ireland, following the collapse in the public finances, the then government made significant inroads on the necessary fiscal correction before it left office. In late 2010, Brian Lenihan put in place an adjustment programme which, while very tough, was achievable. Significantly, this plan underpromised on growth.

When the Fine Gael/Labour government took over in early 2011, there remained a very difficult task ahead of them. However, in substantially continuing the adjustment programme already in train, they were able to outperform the targets for each quarter because of the conservative nature of the growth assumptions that underlay them.

By contrast, in Spain, the outgoing Socialist government made unrealistic promises about the speed of recovery going into the 2011 election, and seriously raised the bar for the conservative government of Mariano Rajoy which succeeded them. On entering power, Rajoy’s government mishandled the process of setting more realistic objectives. This raised concerns with outside observers, while at the same time discouraging the Spanish public.

Between 2011 and 2015, the Spanish government made some very painful reforms of the labour market in order to even up the opportunities between younger and older workers. While this change will take some considerable time to pay off, it has probably contributed to the current recovery through a more responsive labour market.

As overall joblessness rose, Spain experienced some loss of faith in the value of investing in education

With high unemployment of young graduates as overall joblessness rose, Spain experienced some loss of faith in the value of investing in education. However, the Spanish recovery has seen very rapid growth in employment for the better-educated – those who have at least completed high school. The number of women graduates in employment has risen at almost 4 per cent a year since 2013. This underlines the importance for Spain of continuing to invest in upgrading education levels.

As in Ireland, the costs to society of the necessary fiscal adjustment has left an angry electorate, and resulted in significant political fragmentation. In our case, last year it took 10 weeks to form a government. In Spain, it took 10 months and two elections to form the current government. To date in both cases, the political instability has not stopped the economic recovery but it could make adjustment to future economic challenges more difficult.