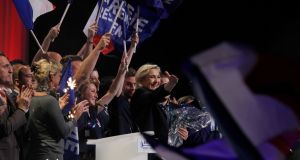 Euro zone economic growth will be steady but modest over the coming year, but that will depend partly on independent candidate Emmanuel Macron winning the French presidency next month, a Reuters poll of economists showed.

The results suggest forecasters, like investors and traders, appear unrattled by political uncertainty as France prepares for a presidential election in which far right and anti-European Union leader Marine Le Pen is polling strongly, although no major survey sees her winning.

France is the EU’s second biggest economy so turmoil there would weigh on the wider union.

“A win by the populist Marine Le Pen in the second round could result in a prolonged period of uncertainty as she attempts to negotiate better terms for France remaining in the EU,” said Beata Caranci, chief economist at TD Securities.

A separate poll of foreign exchange strategists earlier this month showed the euro falling about 5 per cent to near 15-year lows and close to parity against the dollar in the immediate aftermath of a Le Pen win the vote.

Still, the latest poll of over 80 economists showed predictions for euro zone growth and inflation have barely budged over the last two years of monthly Reuters surveys.

“Our macro views involve assumptions on not just policy but also politics, especially in Europe. For example, underlying our growth forecasts is the view that European elections will not lead to governments that try to take their countries out of the euro area,” noted Ajay Rajadhyaksha, head of macro research at Barclays.

When asked which candidate for the presidency would be best for French economic growth, 30 of 51 respondents said Emmanuel Macron, 19 said Francois Fillon and the remaining two economists said both. But none chose Marine Le Pen.

STEADY AS SHE GOES

Economic growth in the euro zone is expected to be steady at 0.4 per cent in each quarter through the third quarter of next year, unchanged from last month’s poll.

Median consensus for annual GDP growth for this year was 1.7 per cent and for next it was 1.6 per cent, in line with the International Monetary Fund’s latest projections.

But inflation is forecast to remain below the European Central Bank’s target of close to but under 2 per cent until at least 2019. The highest call was for inflation to average 2.1 per cent this year.

Those decent-yet-uninspiring predictions come despite surprisingly strong business confidence surveys and hints of a pick up in price pressures since the start of the year.

But with the inflation outlook still tepid, economists unianimously said the ECB would stand pat at its monetary policy meeting on April 27th. The central bank is expected to keep its interest rates on hold through to until at least the fourth quarter of 2018.

While the ECB is expected to remain on the sidelines through this year, when asked on the next likely move, a majority of economists said it would extend its asset purchases programme beyond December 2017 with a cut to the monthly spend, currently at €60 billion per month.

The next top pick was for the ECB to announce a taper to its its asset purchase program with an intention to wind it down completely.

“The first step in the ECB’s exit strategy is likely to be tapering and not hiking policy rates,” said Kristian Toedtmann, economist at DekaBank.

“The ECB wants to withdraw stimulus only very slowly. At the same time, it seems not inclined to extend the universe of assets that it can buy. Therefore, the most consistent way to normalize monetary policy would be to phase out QE.”