Communicating the workers’ vision with a pragmatic style

Steve Fitzpatrick, the pragmatic union leader who won’t leave managing to the managers 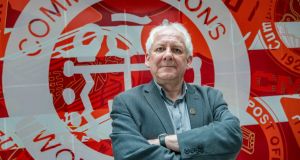 There is a whiff of belligerence around the industrial relations scene these days. Trade unions and companies in myriad sectors from transport to retail have been tangling for months.

The general atmosphere feels a bit like a Saturday night outside a chipper after the pubs close: plenty of posturing and bawling, all liable to kick off if some loudmouth – judgment shot from the pints – does something stupid.

Of all industrial sectors, communications should be an obvious candidate for trouble. Look at the challenges faced by its protagonists.

An Post has lurched into financial crisis, some telcos are only just back on their feet after the last crisis, and all the while the internet swings through the sector like a wrecking ball, making history of all of their strategies.

Yet the Communications Workers Union (CWU) has, to date, managed to mostly avoid strife of any note involving its near 15,000 members. No small achievement, given most of them work in some of the economy’s most strategically important, and challenged, companies.

Steve Fitzpatrick, its doughty general secretary, is no Gandhi. With CWU a leading member of the anti-water-charges movement, he doesn’t sound like an industrial pacifist. He also tends to luxuriate in that sea of grievances about the media and establishment that can sometimes make non trade-unionists wince.

But from An Post to Eir, Fitzpatrick has forged a reputation as one of the most pragmatic trade union leaders on the bloc, preferring sensible deals to discord.

“In years past, people said we were always either coming from a strike, or on our way to the next one. But in the 13 years I’ve been general secretary, we’ve had barely a few days [of strike action]. Not bad,” says the former postman.

Do some of the more militant among the CWU’s rank ever pressure him to kick the doors in rather than talk to company leaders when there is an issue?

“Well, a few say to me that I often seem more interested in dealing with the companies than the members. But I genuinely believe that managing those big enterprises is too important to be left to the managers,” he says, deadpan.

Fitzpatrick says he recently reminded David McRedmond, the relatively new An Post chief executive, that he had worked with three chief executives before him.

“The difference is they’re all gone . . . and I’m not. But look, I’m not pessimistic. The world changes. If we didn’t change with it, the CWU would still be representing people delivering mail on the pony express. I can’t stop the world changing, so I see our job as helping manage that change.”

An Post, where CWU has 8,000 members out of the company’s 10,000 workforce, is at a critical juncture and in need of a strategic overhaul that will likely see a need for many hundreds of redundancies.

If things get hot and heavy, it would be fascinating to be a fly on the wall for meetings between McRedmond, a Gonzaga College-educated foppish culturephile, and the working class Dubliner Fitzpatrick, a Black Sabbath fan who left school at 15. Will they engage or will they clash?

“It depends on the attitude,” says Fitzpatrick, grinning. “I’m meeting him for lunch tomorrow.”

He has gelled well with Richard Moat, the chief executive of Eir. In recent years, in a process begun under Moat’s predecessors but continued by the incumbent, at least 2,500 staff left the business in agreed restructurings. Eir is in far better shape now.

“Moat works for a bunch of venture capitalists that would cut my head off tomorrow if they could. But personally speaking, I’ve a lot of time for him. I think he is solid, steady and he gets on with it.”

CWU also has 1,000 members in Vodafone, with others in packages giant UPS, Ireland’s largest courier DPD Ireland and several smaller couriers along with many call centres.

Considering his role is steeped in politics, he appears to have noticeably less regard for government politicians, lampooning them one by one.

Fitzpatrick doesn’t do politically correct jokes, either, although his twinkle-eyed quips were much funnier and sounded more whimsical over a coffee than they probably read now on paper.

“We’ve had to deal with some ministers over the years that, if you hit them with your car, you’d back over them to make sure.”

“His record on Irish Water speaks for itself and he even made a mess out of posting out the leaflets for the household charge. I can’t remember anything he didn’t make a f***-up of. It’s obviously what you have to do to get a [European Union] commissioner’s job.”

“It didn’t matter whether you trusted him or not. I never saw anything like him,” he says, furrowed brow confirming that isn’t a compliment for Ryan.

Noel Dempsey was the Fianna Fáil minister who oversaw communications during a pre-crash An Post dispute.

“We met offside to fix everything and to agree what he would do. There was nothing in writing because we weren’t supposed to be meeting. I went back and convinced our executive, but we couldn’t convince the post office.”

“We ended up having a row and he was basically threatening me, wagging his finger at me. I told him if he didn’t take his finger out of my face, I’d break it.”

He says Pat Rabbitte, himself a former trade union official, was “probably the best of them, but in some ways the hardest to deal with because he knew the ground too well”.

The incumbent Minister for Communications is Denis Naughten, the independent TD from Roscommon. Fitzpatrick says he is impressed by his grasp of the issues so far, and appears hopeful they will have a good relationship.

It could yet be tested by the scale of the challenge facing An Post.

It has been reported recently that the State postal group lost €15 million overall last year, and took a hit of €45 million on its universal service obligation (USO) to deliver post daily across the State.

Its USO obligations have trashed its finances in recent years, and it recently bought time with a rise in the price of stamps to €1. But McRedmond appears to be preparing the ground to push through a far-reaching restructuring and a raft of post office closures. Consultants McKinsey are currently in situ.

“Everybody wants their local post office to stay open, despite the fact they never go to it. We know of at least 150 where they don’t make enough money to pay the ESB bill,” says Fitzpatrick.

But he says his members will “have an issue” if a mooted 30 regional offices, staffed by An Post employees, go out to contract.

The CWU agreed a 2.5 per cent pay increase for its members via the Labour Court last year, as An Post staff hadn’t received a pay rise for the best part of nine years. There has been talk of a them seeking 3.5 per cent this year, although that now feels a long way off.

Fitzpatrick recognises the need to reduce staff numbers significantly, with the terms already laid down by the Labour Court. Would they get the numbers?

“Yes. But if there’s a plan and I can convince my people to back it, and it means 300 or 500 have to go, the money isn’t there to pay for it. It’s all gone subsidising the USO. Does that mean An Post has to borrow to fund a scheme?”

The separate postmaster’s union also covets cash for its own exit scheme, while McRedmond will also need capital to fund a strategic re-pivoting of the organisation, perhaps into the burgeoning packages market.

Might the State step in? Not if the recent transport sector disputes are anything to go by. But this is different. There is a clear need for fresh capital to help restructure An Post, as opposed to an ongoing subsidy to pay bills. In these circumstances, it would appear to make sense for the shareholder to invest.

In the meantime, Fitzpatrick has entered talks on issues that would have been “anathema” a few years ago, such as evening and weekend deliveries. It would help An Post capitalise on opportunities in the packages market, delivering to online shoppers when they get home from work.

Fitzpatrick is also European vice-president of Uni Global Union Postal and Logistics. He has studied the reform of State post incumbents all over the continent, and is optimistic a way forward can be found for An Post, with delivering letters a smaller part of the business.

“But let’s not take too long. We’re of the view that, if the money is there to reduce numbers, we need to do something quick and dirty.”

Fitzpatrick intends to spend the next couple of years readying his succession at CWU before he retires. He has been a full-time official since the mid 1990s, and general secretary since 2004.

Before that, he was a postman in Crumlin for 20 years. His says his interest in union activism was seeded by a beating he took from gardaí during a long and bitter pay strike at An Post in the late 1970s when he was just married.

Through his activism in the CWU, he was sent on all manner of education and training courses, feeding his obvious intelligence. He says trade unionism has given him a kinship with like-minded, working class activists.

Although deeply politically thoughtful, he is jaded by the state, as he sees it, of the establishment political left. A self-described “old Labour type”, he now appears to consider the party a sell-out, and blames its most senior figures.

I remind him that a similar groundswell of well-meaning, but distinctly populist ,opinion in the UK swept old-style leftie Jeremy Corbyn to the head of the Labour party there. And look at the state of it now – an unelectable wreck, weeks away from gifting the Conservatives yet another election.

`A force for good'

Following votes by its members, the CWU has been at the forefront of the Right2Water anti-charges and anti-metering campaign, and Fitzpatrick is now active the broader Right2Change policy banner that seeks politicians of various parties to sign up.

“I love this country, but I don’t like what it has become. I don’t like the homelessness, the inequality. There are choices to be made about where we take this country next. Choices about policy, about taxation, but everyone runs away from that.”

Trade unions, he believes, are a “force for good” in society. But don’t forget their members. They are a force for the good of their members, first and foremost. Most private sector workers are not members of unions, however.

“The demise of trade unions is one of the reasons for the massive increase in inequality for all workers,” counters Fitzpatrick.

“The older I get, the more I think I’m becoming a Buddhist. I believe in balance. Trade unions help balance unbridled greed. ”

Football team: Everton (so he is therefore a blue, and not a red)

Something about him we might expect: He was in Stuttgart for Euro ’88 to see Ireland beat England.

Something that might surprise: He attended his first Electric Picnic last summer, although he glamped for the weekend.