If UK leaves Customs Union a customs border is inevitable 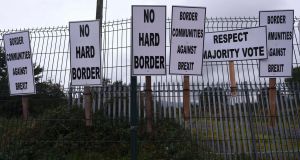 A protest by anti-Brexit campaigners at the Border town of Carrickcarnon, Co Louth. Photograph: Reuters/Clodagh Kilcoyne

Whatever form Brexit takes it will be particularly disadvantageous for Northern Ireland. This is of special concern to the Irish Government, not only in economic terms because of implications for cross-Border trade, but more importantly because of the potential threat to political stability in the North.

One frequently canvassed suggestion is that Northern Ireland should retain “special status” within the EU. While many politicians North and South of the Border have suggested this approach, there has been no clear definition of what this would mean.

At its lowest level it could mean continued access by the North to certain EU support schemes, such as funding research, cross-Border projects or some infrastructure investment.

While these could be important symbolically, they would be unlikely to soften significantly the economic blow from Brexit as the monies involved would be small. It would also be open to London to make counterbalancing cuts to its support for the North.

These subsidies are intimately related to the EU market in agricultural goods – something the UK is determined to leave behind. While the DUP’s confidence and supply deal substitutes farm funding from London, this is strictly temporary and for the duration of the current unstable Westminster parliament.

If the UK leaves the Customs Union a customs border, however implemented, is inevitable. Even if, as a result of a favourable trade deal, there are no tariffs on goods made in the UK entering the EU, there will continue to be tariffs on goods imported from outside the EU through the UK. This will affect all supplies coming from UK retailers to their outlets in Ireland.

A lot of discussion around “special status” has suggested that the North should remain within the Customs Union, which would allow free movement of goods on this island, with the customs border lying between the island of Ireland and Britain.

Apart from its political unacceptability to the unionist community, locating the customs barrier in the Irish Sea takes no account of the reality of the economy of Northern Ireland, whose import and export sectors are heavily integrated with Britain, to a far greater extent than any links with the Republic.

Though British chains, like Tesco and Debenhams, have a strong presence in the Republic, almost the entire retail and distribution sector in the North is integrated with Britain.

The Northern Ireland economy relies heavily on imported goods, three-quarters of these coming from Britain. The result is that there would be far more dislocation to the North’s internal economy from a customs border between Britain and the North than from one between the North and the Republic, as the Republic is a minority supplier to the North.

In addition, exports from the Northern Ireland economy to the EU (including Ireland) are only 40 per cent of the value of the exports going to Britain. Once again, for the North’s exporters customs-free access to the British market is far more important than access to the EU market.

The costs imposed on Northern exporters from customs barriers with Britain would be very substantial, and the gains from trade with the rest of Ireland could not compensate for this.

This means that, because of the integration of the North’s economy into the wider UK economy, special status for the North as part of the EU Customs Union would come at a very high price for Northern Ireland.

While it would bring some economic benefits for the Republic, these would be relatively small.

Most of our trade is with Britain rather than the North. In addition, the transit trade through the UK, involving much of our trade with outside world, means that wherever customs barriers are erected they are going to have serious negative consequences for Ireland.

The best solution from the point of view of both Northern Ireland and the Republic is for the North to use its leverage to persuade the UK government that their commitments to the citizens of North can only be met through the UK remaining part of the wider EU Customs Union even if they exit the EU.

The North’s economy faces even bigger challenges from Brexit than the UK as a whole, and much work still needs to be done to prepare the North for Brexit.

Are you a Monica, Joey or Chandler when it comes to your data privacy? 06:00
Money problems for Fine Gael as think tank shoots down tax proposals 05:42
On your bike: Dropbox backs Dublin Cycling Campaign 05:41
LogoGrab unveils new AI ad-detection tool 05:35
Conference for software geeks returning to Dublin 05:30

1 Are there annual limits on inheritances or gifts to a child?
2 Ireland has EU’s most progressive tax system, study finds
3 Who are Ireland’s 17 billionaires?
4 Fallon & Byrne gets permission for extension in Exchequer Street
5 My father in a nursing home wants to gift me his house
6 Domino’s Pizza spared costs despite losing appeal
7 UK to prioritise EU trade deal over one with United States
8 IDA chief says State could soon ‘be fighting for a smaller pool’ of foreign investment
9 Conference for software geeks returning to Dublin
10 Irish workers now ranked as most productive in world
Real news has value SUBSCRIBE