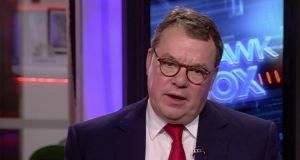 Speaking to CNBC, Standard Life’s Keith Skeoch said, “certainly we are looking to put our MiFID company into Ireland”

Standard Life has reiterated its intention to move some of its operation to Dublin in the aftermath of Brexit.

Asked where he thought the best competitor to London was, Mr Skeoch said that for asset management there were two clear homes, Luxembourg and Ireland.

On the progress of the Brexit negotiations, Mr Skeoch added that he was “quite concerned”, and suggested that the best way to plan for the outcome of the talks was to “plan for a hard Brexit”.

“The biggest issue here is uncertainty and, as long as uncertainty persists...that is actually what causes issues for business.”

The asset management company is one of a number of institutions that have nailed their flag to the mast of one country or another. Most recently Barclays Bank confirmed it had taken a 20-year lease on a Dublin office space owned by property investment firm Green Reit.

Standard Life already has an operation in Dublin, and is unusual among British life insurers in having thousands of customers in the EU. Financial services firms are looking to set up regulated subsidiaries in the EU in case they lose access to the bloc after Brexit.

Speaking in May, the company’s chairman Gerry Grimstone said: “The most likely scenario – and the one we are now working towards – is using our Dublin-based operation to continue to support our European customers and clients.”

Aside from Barclays, Bank of America Merill Lynch also signalled its intention to set up shop in Dublin. The bank’s Irish subsidiary, Merrill Lynch International Bank (MLIB), had the largest balance sheet in Dublin in 2013, before its half-a-trillion-dollar financial derivatives portfolio was transferred to the UK. At its peak four years’ ago, MLIB’s assets stood at $595 billion, three times that of Bank of Ireland. It currently stands at $5 billion.

Investment banks Morgan Stanley and Citigroup have also revealed in the past week that they plan to expand their Irish operations as they prepare for the UK to leave the European Union in March 2019.

Morgan Stanley aims to set up a fund management company in Ireland, which may employ between 20 and 50 people in addition to its existing 30 Dublin-based fund servicing and administration staff.

Citigroup said it will also expand its footprint in the Republic, where it already employs about 2,500 people.

However, Both Citigroup and Morgan Stanley plan to establish their EU trading hubs in Frankfurt, Germany’s financial capital.