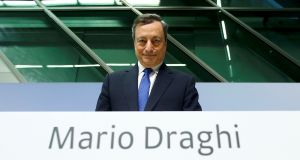 With euro zone growth and inflation slowly picking up pace, the European Central Bank is set to argue on Thursday that its quantitative easing programme is still needed to keep the recovery on course. It is all but certain to leave current monetary policy in place and maintain a promise for lengthy stimulus, having extended its bond-buying programme just last month.

ECB president Mario Draghi can argue the bank has done its part to mend growth, but he will also note the recovery is not self-sustaining, underlying inflation is weak and political risk from key elections weighs on the outlook. So turning down the ECB taps now is inappropriate, he is expected to say.

On the face of it, Mr Draghi should be relaxed. Inflation hit a three-year high last month, manufacturing activity is accelerating and confidence indicators are improving, all pointing to solid growth at the end of last year. Indeed, euro zone business growth was the fastest in more than five years in December, order books are surging on export demand, and consumption is holding up, despite rising energy costs, all pointing to the sort of resilience not seen since before the bloc’s debt crisis.

The underlying picture is mixed, however, giving Mr Draghi plenty of arguments to bat back criticism, particularly from Germany, the bloc’s biggest economy and the ECB’s top policy foe. Inflation is still just half of the bank’s 2 per cent target and the jump is mostly down to higher oil prices while underlying price growth remains dangerously weak.

The market euphoria after Donald Trump’s election win in the US is also yet to be backed up by concrete policy action and the threat of more protectionist policies from the United States and possibly Britain could reverse market sentiment.

“The December decision has put the ECB on autopilot at least until the summer and until after the Dutch and French elections,” ING economist Carsten Brzeski said. “This autopilot should also immunise the ECB against short-term volatility in macro data.”

The ECB announces its rate decision at 12:45 GMT and Draghi holds a news conference at 13:30 GMT.