Wolfgang Munchau: populists can get the economy right 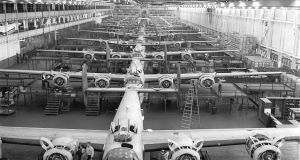 A Ford production line during the second World War. It could be possible that odious populists are getting the economy right when the liberal elite did not

If you have two strong arguments, the surest way to lose a debate is to add a third one.

The superfluous argument of our time is, more often than not, the finger-wagging warning of economic doom. Starting this week, we need to get our heads around the possibility that US president-elect Donald Trump is simultaneously reprehensible and economically successful – at least for some time.

The instinct has often been to conflate political decency and economic efficiency because this is what has been done for such a long time. Fortuitously, our open liberal systems also happened to be the most efficient. They even produced an acceptable distribution of income until about 10 years ago. Yet the period from 1989 to 2007 was exceptional – history is littered with economically successful dictators and economically disastrous liberal democrats.

You may be in Davos this week seeking reaffirmation of your deeply-held beliefs when you pontificate about the future of the universe. Or you may be on Facebook or Twitter expressing your fury about where the world is headed. My advice is to narrow your focus.

Brexit is terrible because it deprives young Britons of the right to choose where to live, study and work. It deprives them of a European identity many believed they possessed forever.

If this is what upset you about the Leave vote then you were insane to allow your political campaign to be hijacked by lobbyists who kept whining about the loss of the single European passport for banks. This is the superfluous argument that lost the Brexit referendum. Keep making that same mistake in the battles that loom in 2017 and the populists will win everywhere.

But he is an exception. I know economists who now say that Brexit will cause a recession this year, having failed to produce one in 2016.

One of the many factors forecasters have failed sufficiently to consider is the global environment. A Brexit-induced sterling crash could in theory have turned out to be dangerous. But this is not the 1970s. We are living in an age of excess global liquidity, which renders a fall in sterling self-limiting. Asian investors, for example, are streaming into the top of the London property market, where they find deflated prices, which they pay with a devalued currency.

The truth is that our ability to forecast the future beyond the current quarter is limited. We certainly cannot forecast the economic impact of a complex political event, such as Brexit or the election of a new US president. Too many future unforeseen events will intrude.

We cannot translate the result of an opinion poll into an election probability either. People keep asking me to tell them the probability of Marine Le Pen, the far-right National Front leader, winning the French presidency. The problem is that the election campaign has not even started. The correct answer about the probability of a Le Pen victory is that I do not have the foggiest. Nor does anyone else.

More often than not, there is a kernel of truth in those forecasts, as there was in the Bank of England’s prediction of what could happen after Brexit. The fakeness of the maths lies in an exaggerated inference. Economic models have their uses, as do opinion polls. They provide information to policymakers and markets. But nobody can see through the fog of the future.

Fake maths has given us, the liberal establishment, the illusion of certainty. Once the illusion crumbles, we are left with an uncomfortable question: is it possible that some populist demagogues will end up producing better economic policy than our friends in Davos?

The populists could succeed simply by undoing the mistakes of the present regime. They will not succeed in the long run. But they may succeed before they fail.

The political and economic regime change we are undergoing constitutes the most serious assault on our values I can remember. We would be foolish to deny that it could just be possible, from the perspective of the median voter, that the odious populists are getting the economy right when the liberal elite did not. – Copyright The Financial Times Limited 2017