Davos: HSBC to move some staff to Paris after Brexit 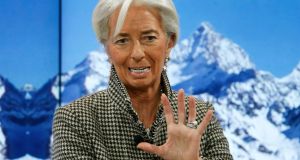 British bank HSBC is to move staff to Paris following Britain’s departure from the European Union, its chief executive confirmed on Wednesday. In an interview with Reuters on the fringes of the World Economic Forum in Davos, chief executive Stuart Gulliver said that staff responsible for generating about a fifth of its UK-based trading revenue would be moving, though the move would not take place this year, or “maybe not even next”.

Mr Gulliver was speaking a day after British prime minister Theresa May gave her strongest signals yet of Britain’s plans for exiting the European Union.

The prime minister is due to fly in to the Swiss town ahead of a key note address on Thursday morning. She is also expected to meet senior banking officials. Many senior figures in the international banking community, including HSBC’s Mr Gulliver, have been strongly critical of Britain’s decision to leave the bloc. Chancellor of the Exchequer Philip Hammond will also address delegates, on Friday, in a bid to assuage concerns about Britain’s future economic direction in the wake of Brexit.

Taoiseach Enda Kenny and Minister for Finance Michael Noonan arrive in Davos on Wednesday, and will attend an IDA dinner with approximately 50 current and prospective clients on Thursday evening.

Meanwhile, the second full day of the World Economic Forum continued on Wednesday in Davos with a number of sessions devoted to the question of globalisation and the challenges facing the middle classes.

Speaking in a session on How to Fix the Middle-Class crisis, IMF managing director Christine Lagarde said that across the world the middle class was both “growing and shrinking”. While the number of those entering the middle class sphere in emerging economies was increasing, she said, in advanced economies the middle class was shrinking. “The middle class in the United States has shrunk from the 60ish to the 50ish. That is the result of more wealth accumulating at the top, and moving down from below. If you combine that with signs of lack of trust, lack of hope, disenchantment with many of the principles and visions people had for their future . . . there is clearly a crisis.”

Harvard professor Larry Summers said there was no “magic bullet” to solve the current crisis, but he said that there was a pervasive feeling that the government was not fighting for its people. “They feel that everyone else is being looked after . . . They feel that they are not being heard.”

Ray Dalio of Bridgewater Associates said that while there had been a narrowing of the wealth gap internationally, “within countries there has been a widening of the wealth gap.” “We may be at a point where globalisation is ending and that provincialism and nationalism is taking hold.”

But Christine Lagarde defended globalisation, noting that much of the change that had taken place in working patterns was due to technology.

“To turn our back to globalisation, to helping development, is exactly the wrong approach. Globalisation should take a new turn; the asymmetry in certain cases should be rectified.”

On Tuesday, Anthony Scaramucci, a key Trump advisor, said that America’s “asymmetric” relationship with China on trade needed to be rectified, though he rejected suggestions that the US and China were entering a new era of trade tensions.

Italian finance minister Pier Carlo Padoan said that European economies were facing an added challenge because Europe had become part of the problem, not the solution. “Europe used to be the solution to many of the problems of those who are left out, now this is being turned around completely,” he said, noting that many people see their problems being generated in Brussels and Frankfurt.

The World Economic Forum is now in its 47th year. More than 3,000 senior figures from the world of politics and finance are gathering in the Swiss resort this week for the annual meeting.