Europe’s ‘zombie’ recovery will fall behind US, Deutsche Bank warns 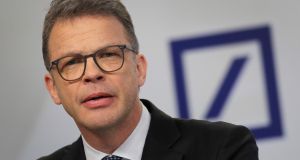 Christian Sewing said companies have to adapt to the new environment rather than simply being propped up by governments. Photograph: AFP via Getty Images

Europe will create thousands of “zombie companies” and lose competitiveness against the US and other countries if it keeps extending state aid to shield the economy from the coronavirus pandemic, Deutsche Bank’s chief has warned.

Christian Sewing told a conference in Frankfurt on Wednesday that “Europe threatens to suffer again from its greatest weakness. We are relatively good at counteracting the symptoms of a crisis. But we are slower to adjust permanently to a new normal state.”

Warning that the crisis in the US may be deeper, but its economy may also rebound faster, Mr Sewing cited an estimate by German credit agency Creditreform that one-sixth of the country’s companies could become a “zombie”, propped up with state aid and other support measures.

He said: “This would have serious effects on productivity in our economy. Companies have to adapt to the new environment – but that is not exactly happening everywhere.”

The German government recently expanded its package of economic support measures, including extending by a year its Kurzarbeit furlough scheme, under which workers are sent home and receive about two-thirds of their pay from the government.

Berlin also lengthened the waiver introduced in March that exempts companies hit by the pandemic from having to declare insolvency. France and Spain have also recently extended their furlough schemes.

This extension of state aid has prompted economists and business bosses to warn of a rise in zombie companies, which are unable in the long-term to cover their debt-servicing costs from profits.

The Deutsche Bank boss said the pandemic was “accelerating many structural upheavals – from digitisation to the pressure to operate more sustainably”.

But he warned the “renewal process is stalled”, and international competitiveness is lost when companies wait for things to return to normal, especially “if they are supported in this strategy of waiting through permanent financial aid, long-term short-time work benefits or a softened bankruptcy law”.

“It is a bit like the extremely loose monetary policy of the European Central Bank. It is correct as an immediate reaction to an economic shock – but the longer you continue it, the more the negative side-effects outweigh,” he said.

He contrasted Europe’s response to the pandemic with that of the US, which he said had been “less successful in containing the virus” but had companies that were “already much more radical in adapting”.

“The crisis there may be deeper in the short term, but the economy in the US will then recover more quickly and quickly return to a higher growth path,” he said.

The euro zone economy suffered a historic 12.1 per cent contraction in the second quarter. While economists expect a rebound with growth of more than 8 per cent in the third quarter, Mr Sewing warned “a return to old economic strength will take longer than is generally assumed”, and he said consumer behaviour will permanently change “in many areas”.

“People will continue to travel less, consumers will spend their money more cautiously or differently,” he said. “As long as sales are so uncertain, as long as there is no reliable vaccine, companies will also be more reluctant to invest.”

His comments contrast with the more bullish message of minister for the economy Peter Altmaier, who said on Tuesday that Germany would recover faster than expected from the pandemic, with the resilience of its labour market helping achieve a sharp, V-shaped recovery.

Mr Altmaier said Berlin expected Europe’s largest economy to shrink by 5.8 per cent this year, compared with its earlier forecast of a 6.3 per cent contraction. He forecast the economy would return to pre-pandemic levels in 2022.

1 Irish designer of Oxford vaccine: ‘I’ve never worked so hard in my life’
2 BOI customers to be charged twice with bank fees on New Year’s Eve
3 Covid-19 will worsen housing affordability, report warns
4 Family who founded Ina’s Kitchen Desserts ask court to appoint examiner
5 O’Flynn and BlackRock to double money with €100m sale of former HP campus
6 We continue to ignore massive pensions elephant in the room
7 Boeing seeks dismissal of Norwegian Air’s €1bn lawsuit over Max aircraft
8 Greencore announces £90m share placing as profits plunge 81%
9 Chris Johns: I think we are on the cusp of an economic boom
10 Must I pay tax on sale of inherited apartment in Baltics?
Real news has value SUBSCRIBE