Coronavirus: Epidemiology has been a political football from the get-go 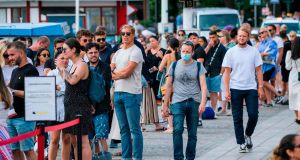 Sweden has largely avoided a lockdown and has kept schools, businesses, bars and restaurants open throughout the pandemic. File photograph: Jonathan Nackstrand/AFP via Getty Images

Ireland now appears to have the worst of both worlds: stricter, more economically divisive restrictions combined with worse case numbers than the anti-lockdown Swedes.

It’s a lose-lose scenario in the eyes of those who opposed the Government’s tougher stance in the first place.

Those calling for a faster easing of restrictions have seized upon the fact that the incidence of coronavirus here is now higher than it is in Sweden for the first time in the pandemic.

Ireland recorded 30.6 cases of the virus per 100,000 population over 14 days to last Monday, according to the European Centre for Disease Prevention and Control (ECDC), compared with 23.4 in Sweden, which avoided a lockdown and has kept schools, businesses, bars and restaurants open throughout the pandemic.

Twelve weeks ago, it was the opposite.

When cases here slowed to a trickle in early June, advocates of a “zero-Covid” policy pointed to Sweden’s higher caseload and death rate and the fact that it had not benefitted economically from staying open as evidence to support keeping restrictions in place for longer.

At that point, the Government’s containment project was being heralded as a relative success. Sweden has at various times been used to justify all Covid-19 policies.

Epidemiology has been a political football from the get-go, with campaigners cherry-picking their way through complex and often partial datasets to justify arguments or positions, which may or may not turn out to be correct.

US president Donald Trump even queries the point of testing as it uncovers more cases and worsens the US’s standing in the global coronavirus league table, as if that were the problem.

If economics is a dismal science, epidemiology is an abused one. We’re a long way off knowing why certain countries have been more affected or less successful in containing the virus.

Who would have picked Italy as the next staging post of the virus after Asia? Was it the garment trade that underpins Milan’s fashion industry as everyone seems to think? No one knows for sure.

Some nations are younger, more gregarious, more tactile, bigger drinkers, living in closer proximity with each other. These social traits are likely to have played a part, but more rigorous scientific studies are needed to ascertain just how much of a part.

That’s not to say that government responses haven’t had an impact. Male populist leaders have reacted with uncanny similarity; first denying or trivialising the outbreak, then falling out with health officials, before claiming, after the horse has bolted, to be on top of the problem.

Defensive bombast is not what you need in an emergency. The US and Brazil are testament to that.

Mixed messaging is extremely dangerous in a crisis. The low take-up of masking wearing here, at least initially, can be traced to the reduced emphasis given to it by officials. That, in turn, can be traced back to the World Health Organisation’s seeming volte-face on the effectiveness of masks.

Even now, Swedish officials argue that masks are not effective enough at limiting the spread of the virus to warrant mass use, insisting it is more important to respect social distancing and hand-washing recommendations.

The reasons why Ireland is experiencing the current upsurge in cases is difficult to explain. Hot-bedding among meat factory employees; increased attendance at sporting events; increased youth circulation have all been offered up as possible explanations. Asymptomatic carriers make transmission very difficult to detect.

Either way, the virus has squirrelled its way back into the community. Will the return of schools exacerbate this? Probably. Barely two days in and already a class in one Dublin primary school has been sent home.

Anthony Staines, professor of health systems at Dublin City University, warns that unless “uncontrolled community transmission” is halted, we could have outbreaks in 40 or 50 schools in the coming weeks.

We need to stop arguing about who got it right or wrong and hone in on a few non-negotiables.

Mask wearing, hand washing and social distancing should no longer be the subject of debate. The public needs to be unified on and adherent to these.

Lockdown fatigue combined with revelations about public officials flouting their own rules has weakened the public’s resolve and this needs to be rekindled. That requires stronger and more focused political leadership.

The disease isn’t going away and an economic crisis is looming large. Revenue figures on employee pay show that the total for the three-month period between March and May was €22.5 billion, a drop of €2.7 billion or 11 per cent, on last year. If repeated for a year that corresponds to a loss of income of more than €10 billion, comparable to what we saw in the 2008 financial crisis.

The reason why the tremors of that particular economic earthquake are not being felt, outside of consumer-facing sectors such as hospitality, is because of Government wage supports, which have kept us in a state of suspended animation. But they can’t last forever; they have merely bought us time.

Time to deploy a more rigorous testing and tracing infrastructure – a prerequisite for reopening the economy fully.

At the moment, we’re still behind the curve on testing. We haven’t got the turnaround time for tests inside 48 hours or the time for contact tracing inside 72 hours.

There’s much yet to do.