Considerable concerns remain ahead of the introduction of the new scheme 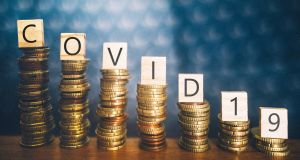 Considerable concerns remain ahead of the introduction of the new employment wage subsidy scheme, with lobby groups warning it will not stop businesses from having to cut jobs or even close down.

The new subsidy, which replaces the temporary wage subsidy scheme, comes into effect on Tuesday and is aimed at supporting businesses hit by the coronavirus pandemic.

The scheme provides a flat-rate subsidy to qualifying employers based on the numbers of eligible employees on the payroll. Applicants for the scheme must possess a valid tax clearance and experience a minimal 30 per cent reduction in turnover between July and December due to Covid-19.

More than 16,000 employers have registered for the new scheme over the past week, according to Revenue. While many lobby groups welcomed additional clarification about the scheme on Monday, they also warned that it did not go far enough to protect at-risk businesses.

Dublin Chamber said that having caused “understandable dismay” after initially excluding small business owners, there are now fears that the decision to pay out in arrears may lead to serious cash issues for many businesses.

“While we understand that the costs of the subsidy have to be managed downward in the medium term, protection of viable businesses and employment should remain the immediate priority to prevent long-term scarring of the economy,” said Graeme McQueen, head of communications at Dublin Chamber.

Retail Excellence Ireland also expressed concerns about the arrears issue, saying most businesses would not be able to withstand any delay, particularly as payments are lower than under the previous scheme.

“Retailers are managing their cash flow very carefully, with many trading day to day. This new scheme will mean that where salaries are paid weekly, the subsidy payment will be paid back up to six weeks later and at €203 is 49 per cent lower than the temporary wage subsidy scheme. We fully expect further, significant job losses in the retail industry as we move towards the critical Christmas period,” said managing director Duncan Graham.

The organisation has also called on the Government to consider “more realistic” declines in turnover of businesses.

Restaurants Association of Ireland criticised the new scheme on a number of grounds, most notably the qualifying period. It said this should be done across the full calendar year as it did not sufficiently take account of seasonal peaks and troughs. The association also criticised the exclusion of employees earning €151.50 or less, which it said affected part-time workers and students working in the sector.

The Licensed Vintners Association was also critical of the qualifying rate, saying it “victimises the lowest paid in society”.

A spokesman for the body said a recent suggestion by Minister for Finance Pascal Donohoe that businesses could give employees extra hours to qualify for the scheme was unhelpful.

“Given the extremely difficult financial circumstances facing pubs and the rest of the hospitality sector – something that Mr Donohoe also didn’t take into account in the Government’s derisory package for the pubs still closed – it would be useful to know how he expects these businesses to be able to afford the additional staffing costs he was advocating,” the spokesman said.

“And what about these low-paid workers employed by the pubs still closed? If the money isn’t there in these businesses, it is going to lead to further job cuts,” he added.