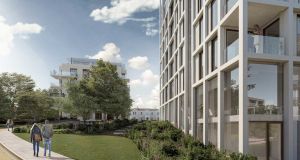 An artist’s impression of what the apartments in Monkstown could look like.

An Bord Pleanála has given the green light for a 290-unit residential development for Monkstown in south Dublin despite local opposition.

The proposal, by Lulani Dalguise Ltd for a site 350m west of Monkstown village, comprises of blocks with one reaching nine storeys in height.

In response to the application by Lulani Dalguise Ltd for the 266 apartments and 24 dwellings on lands at Dalguise House at Monkstown, the appeals board received 150 submissions.

The appeals board inspector in the Dalguise application had recommended that the nine-storey apartment block be reduced by two storeys to seven storeys.

However, the recommendation was not adopted by the appeals board which found that the proposed omission of the two storeys is unnecessary concerning the impact on the Dalguise House protected structure and its setting.

The board has ordered the omission of one floor each from two of the other blocks.

The local objectors to the proposal claimed that the density was too high for the site and would put a disproportionate demand on existing services and infrastructure.

They also claimed that apartment block heights of five to nine storeys “is excessive for Monkstown and will be seen from Monkstown landmarks”.

They further stated that the apartment heights are more suited for a city-centre location.

However, the appeals board gave the plan the green light after concluding that the proposed development would constitute an acceptable quantum and density of development at this accessible urban location.

The appeals board also found that the proposal would not seriously injure the residential or visual amenities of the area and would be acceptable in terms of urban design and height.