Europe rediscovers its mojo in Davos 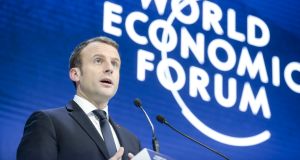 Europe, for so long the sick man at the annual global elite gathering at Davos, has finally got its mojo back.

On the eve of the four-day conference in the Swiss ski resort, the International Monetary Fund upgraded its economic forecasts for the global economy to 3.9 per cent, citing increased optimism on the prospects for the US as a result of tax reforms enacted in December - but also “notable upside surprises” on the European economic front, especially in Germany and Italy.

The IMF sees the euro zone economy expanding by 2 per cent this year and 2.2 per cent in 2019, which would mark the best sustained showing for the region since before the financial crisis.

For many, the kudos lies with Mario Draghi, president of the European Central Bank, who abandoned his predecessor Jean-Claude Trichet’s conservative and reticent approach on handling the crisis, and vowed 5½ years ago to do “whatever it takes” to preserve the euro zone.

The Europeans should take out key man insurance on him,” Davis Rubenstein, co-founder of US private equity giant Carlyle Group, said on a Davos panel during the week of Draghi, whose term is up in late 2019. “When he goes, a real giant will have gone – because he’s done an incredible job”

“The Europeans should take out key man insurance on him,” Davis Rubenstein, co-founder of US private equity giant Carlyle Group, said on a Davos panel during the week of Draghi, whose term is up in late 2019. “When he goes, a real giant will have gone – because he’s done an incredible job.”

Draghi avoided the Davos circus but from his tower in Frankfurt some 500km away, the ECB delivered the strongest riposte to the currency market wobble unleashed by two of Donald Trump’s most senior cabinet members as they arrived as an advance party in Switzerland before the much-anticipated arrival of the US president.

US treasury secretary Steven Mnuchin told reporters on Wednesdays that a weaker dollar was good for his country’s trade, sparking a drop in the greenback to a three-year low against a basket of other currencies, as traders concluded that Trump’s White House was breaking with strong dollar policy championed by previous administrations.

Wilbur Ross, the 81-year old US commerce secretary who made a €500 million profit from a rescue investment in Bank of Ireland post the crash, fuelled the protectionist tone when he said the US was in the middle of a trade war “for quite a while”.

Mnuchin backpedaled in Davos the following day, clarifying that he only meant that weakness in the greenback in the “short term” helped US trade and that he was fully behind the idea of a strong dollar.

But Draghi had heard enough. Speaking after an ECB governing council meeting on Thursday, effectively accused Mnuchin – without naming him explicitly – of using language in discussing exchange rates that breached an international accord reached in Washington last October where countries promised to refrain from competitive currency devaluations.

The dollar recovered somewhat later in the week when Trump said on Thursday that he wanted a “strong dollar” and that Mnuchin’s comments had been misinterpreted.

For seasoned delegates at Davos, it all smacked of the kind of mixed messaging and contradictory statements emanating from various European officials attending the forum at the height of the euro zone debt crisis, which used to bewilder American participants and financial markets.

This year, however, Europe was out in force and on message – seeking to counter Trump’s nationalistic policies and retreat from international-trade and climate-action agreements.

Angela Merkel warned 3,000 political leaders, business executives and others at the annual talkshop that “isolation won’t take us forward” and that countries “must co-operate, that protectionism is not the correct answer”.

French president Emmanuel Macron, fresh from courting Davos-bound executives from Facebook to Google on Monday with his recent labour reforms and business-friendly agenda, arrived in Europe’s highest town with an alert that globalisation was going through a “major crisis” and issued a “call to each and everyone one of us” to push back against the tide of protectionism.

Emboldened by the tone of other European leaders at the conference, Taoiseach Leo Varadkar argued on a panel that “we can project our power in Europe and bring good things to the world” as the US was stepping back.

He circled back to his call last week before the European Parliament for the EU to establish a “Marshall Plan” to aid Africa, just as the US helped in the rebuilding of western European economies after the second World War.

But Varadkar will be concerned that Macron used the world’s biggest stage to press the case for EU tax harmonisation, singling out Ireland as a country that woos overseas firms through an ultra-competitive tax regime.

With a new Franco-German alliance on the horizon as Merkel started formal talks on Friday on forming a coalition with the centre-left Socialist Democrats, the pressure on Ireland’s tax system is only set to grow.