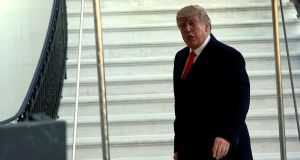 The US will impose new duties of as much as 30 per cent on foreign-made solar equipment, the US Trade Representative’s office said Monday. The president also approved tariffs starting as high as 50 per cent on imported washing machines. China and South Korea condemned the steps, with the Ministry of Commerce in Beijing calling them a “misuse” of trade measures.

The tariffs were announced as Mr Trump prepares to travel to Davos for the World Economic Forum, where the international business and political elite are meeting to discuss topics including the backlash against globalisation. The new tariffs will add teeth to the president’s “America First” foreign policy after months of threatening to get tough on what Mr Trump sees as the unfair trade practices of nations including China and South Korea.

“Despite a positive world economic outlook at the outset of 2018, rising trade friction between the US and some of its key trading partners, notably China, is one of the key risks to the global economic outlook,” said Rajiv Biswas, Singapore-based chief Asia-Pacific economist at IHS Markit.

LG Electronics, a maker of domestic appliances, and South Korean solar panel makers fell initially in Seoul trading on the news while Samsung Electronics Co., which was little changed, said the tariff on washing machines is a “great loss” for US workers and consumers.

South Korea’s trade minister said Tuesday that his nation will file a petition with the World Trade Organization against the US for imposing anti-dumping duties on Korean washing machine and solar panel makers. The US decision is “excessive,” Kim Hyun-chong said.

China exported more than 21 million washing machines globally from January through November 2017, according to customs data. The US measures will worsen the global trade environment, and China hopes Washington will show restraint in trade restrictions, according to a statement posted on the commerce ministry’s official WeChat account.

“The president’s action makes clear again that the Trump administration will always defend American workers, farmers, ranchers and businesses in this regard,” U.S. Trade Representative Robert Lighthizer said in a statement.

More US trade action could be on the way. Negotiators from the US., Canada and Mexico are meeting this week in Montreal for the latest round of negotiations on a revised North American Free Trade Agreement.

While both Mexico and Canada are included in the new solar panel tariffs, Mexico was exempted from the washing machines remedy while Canada wasn’t. The tariff actions may aggravate tensions in the talks over Nafta, which Mr Trump has threatened to pull out of the deal if Canada and Mexico don’t bend to US demands.

The solar tariffs are lower than the 35 per cent the US International Trade Commission recommended in October after finding that imported panels were harming American manufacturers. The ITC was responding to a complaint by Suniva Inc., a bankrupt U.S. panel maker that sought duties on solar cells and panels.

The president approved four years of tariffs that start at 30 per cent in the first year and gradually drop to 15 per cent. The first 2.5 gigawatts of imported solar cells will be exempt from the tariffs, USTR said in a statement Monday.

In the washing machine case, Trump was responding to an ITC recommendation in November of tariffs following a complaint by Whirlpool, which accused Samsung Electronics and LG Electronics of selling washing machines in the US below fair-market value.

Mr Trump opted for the most punitive recommendation by ITC judges for residential washers. He ordered a 20 per cent tariff on imports under 1.2 million units, and 50 pe rcent on all subsequent imports in the first year, with duties lowering in the next two years.

“The newly announced tariffs on washing machines hit South Korea, which is home to Samsung and LG, which competes with Whirlpool, harder than China,” said Pauline Loong, managing director at research firm Asia-Analytica in Hong Kong. “It is significant that the Trump Administration chose an industry, solar panels, that has been in dispute for years - since the Obama administration imposed tariffs in 2012 - to make its point with China ahead of Davos. It is not starting a new fight.” - Bloomberg