UK to have no role in location of EU agencies, says Europe 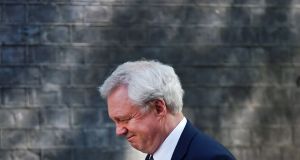 The UK government will have “no say” on the location of key EU agencies such as the bloc’s banking regulator or medicines agency after Brexit, the European Commission has said.

Following hopes from the UK’s Brexit secretary David Davis that London could retain the European Banking Authority and European Medicines Agency in the capital, the commission has insisted the bodies will move to the continent as part of the UK’s divorce settlement.

“The decision to relocate the EMA and the EBA is a decision for the 27 member states to take. It is not part of the Brexit negotiations, it is rather a consequence of Brexit,” a spokesman for commission president Jean-Claude Juncker said on Wednesday.

“The UK is leaving the EU and it will have no say in the location of EU agencies. A matter for the negotiations will be a duty for the UK to facilitate the transfer of these agencies,” added the spokesman.

With cities such as Dublin, Amsterdam, Milan and Barcelona all fighting for relocation rights, the commission called on the UK to help staff at the institutions as they move from the continent

The EMA’s Canary Wharf headquarters hosts 36,000 national regulators and scientists each year from across the continent in London while the EBA has 159 staff in the city.

Despite a transfer of the bodies being laid out in the EU27’s opening gambit in the Brexit talks, the British government believes the question of housing the EBA and EMA is up for grabs.

Leaders from the remaining member states will be meeting at the end of the month to issue their first formal response to Britain’s notification of exit and agree a unified negotiating position.

“While the future location of the seats of EU agencies and facilities located in the United Kingdom is a matter for the 27 member states, arrangements should be found to facilitate their transfer,” says the EU council’s draft Brexit guidelines. – Copyright The Financial Times Limited 2017