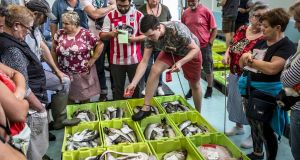 The fish market in Ribera, Spain. Spain’s economy grew by 0.5% in the second quarter, down from 0.7% in the first three months of the year. Photograph: Angel Garcia/Bloomberg

The euro zone’s economy grew by just 0.2 per cent between the first and second quarter, confirming that the region’s recovery slowed over the spring on the back of weaker global demand.

Eurostat, the European Commission’s statistics bureau, published the flash estimate, which is down from 0.4 per cent for the first three months of the year and in line with the expectations of economists polled by Reuters.

Separate figures published for Spain showed its economy grew by 0.5 per cent in the second quarter, 0.1 percentage point below economists’ expectations and down from 0.7 per cent in the first three months of the year.

Meanwhile data for Italy showed that its economy narrowly escaped shrinking in the second quarter, with growth flat over the three-month period – better than the 0.1 per cent contraction forecast by analysts.

Figures published for France on Tuesday showed that the euro zone’s second largest economy slowed marginally to 0.2 per cent in the three months to June from 0.3 per cent in the first quarter, largely due to tepid household spending.

While the region’s labour market remains strong and the performance of the dominant services sector continues to support growth, manufacturers are under pressure from political uncertainty and a downturn in world trade.

Year-on-year consumer price growth in the currency bloc dropped to 1.1 per cent in July, from 1.3 per cent in June, data published by Eurostat on Wednesday showed. The rate was the slowest since February 2018, and below the European Central Bank’s target of close to but under 2 per cent.

The jobs market was a bright spot in Wednesday’s economic data releases. The bloc’s jobless rate slipped by 0.1 percentage point in June from May to 7.5 per cent, the lowest level since July 2008.

The figures come as the region’s central bankers start to design a package to respond to the slowdown in growth. The ECB is expected to unveil a package of measures, including rate cuts and possibly additional purchases of euro zone bonds, on September 12th. – Copyright The Financial Times Limited 2019