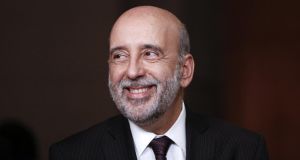 Gabriel Makhlouf was approved as Central Bank governor by the Government in May and will take up the €286,760 post in September. Photograph: Vivek Prakash/Bloomberg

Two former governors of the Central Bank raised concerns with senior figures in Government around the recent appointment of their successor.

Both Philip Lane and Patrick Honohan privately raised concerns around different aspects of Gabriel Makhlouf assuming the role of governor of the Central Bank.

Mr Lane, in private comments, is understood to have discussed how a controversy in New Zealand involving Mr Makhlouf could be managed as he took up his new role in the Central Bank.

Mr Makhlouf was approved by the Government in May and he will take up the €286,760 post in September.

He has been chief executive and secretary of the New Zealand treasury since 2011. Mr Makhlouf was previously a senior civil servant in the United Kingdom where he was a principal private secretary to Gordon Brown when Mr Brown was chancellor of the exchequer.

However, the Government decision was caught up in a controversy involving Mr Makhlouf in New Zealand. It emerged he claimed the accidental leak of sensitive budgetary material was a result of a hack, but a follow-up police inquiry found no evidence of a hack.

Mr Lane did not raise concerns about the appointment of Mr Makhlouf in and of itself, but rather how the controversy in New Zealand, and its implications for the Central Bank, could be managed as it was unfolding earlier this year. Mr Lane declined to comment when contacted.

He served as governor of the Central Bank between 2015 until he took up a new position last month as chief economist with the European Central Bank in Frankfurt, where he will work closely with new ECB president Christine Lagarde.

During his tenure, he dealt with the tracker mortgage scandal and defended the mortgage lending caps which were introduced by Mr Honohan.

The appointment of a Central Bank governor is the sole preserve of the government of the day.

A spokeswoman for Minister for Finance Paschal Donohoe said: “Mr Makhlouf was selected as the new governor of the CBI following a competitive, international process and was, and is, deemed to be the most suitable candidate for the role.

“Mr Makhlouf has been found by the independent State Services Commission to have acted at all times with honesty, integrity and in good faith, and was politically neutral throughout,” the spokeswoman added, in reference to the New Zealand controversy.

Mr Honohan was governor between 2009 and 2015 and rang Morning Ireland in November 2010 to confirm that negotiations were under way between the Fianna Fáil-Green Party government and the International Monetary Fund (IMF) on a bailout package.

Well-placed sources said Mr Honohan separately raised private concerns with figures in Government about the appointment of Mr Makhlouf. When contacted, Mr Honohan declined to confirm or deny this and declined to comment.

The exact nature of Mr Honohan’s concerns are not known. However, one source argued that Mr Makhlouf comes from a general civil service background whereas a candidate with more direct experience of the euro area could have offered an alternative option.

Earlier this week it was disclosed that the European Central Bank (ECB) had also raised a number concerns over the Government’s choice of Mr Makhlouf as new governor.

There was annoyance in Dublin that the ECB would seek to intervene in a decision that is the preserve of a sovereign government.