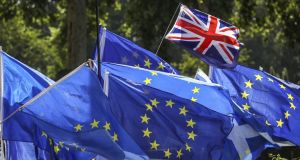 The new figures are notably worse than Government projections in the summer economic statement published only last month. Photograph: Bloomberg

When it comes to Brexit, the bad news keeps getting worse. The question on everyone’s lips is just how bad? Pretty catastrophic, according to the latest economic forecast.

The Central Bank said Wednesday that Britain crashing out of the EU without a deal could cost Ireland over 100,000 jobs. In what is the starkest warning to date, it said a no-deal Brexit could result in 34,000 fewer jobs by the end of next year and more than 100,000 over the medium term.

The new figures show just how alarming the prospect of a no-deal Brexit has become. Just over two years ago, the Central Bank’s then chief economist Gabriel Fagan said that 40,000 jobs could be lost over a 10-year period in the event of a no-deal Brexit. That’s a significant change.

“Given that changes in employment typically lag falls in output, the labour market impact of a disorderly Brexit would continue to be felt in a significant way beyond the forecast horizon,” the Central Bank added in its latest quarterly economic bulletin.

The new figures are notably worse than Government projections in the summer economic statement published only last month. It foresaw up to 85,000 job losses over the longer term if Britain and the EU fail to agree a deal.

Up to 55,000 of those jobs would be lost in the first two years of a disorderly Brexit, it said.

A joint report from the Department of Finance and the Economic and Social Research Institute (ESRI) in March suggested a similar impact, warning of the loss of 80,000 jobs.

Many of the at-risk jobs are in the agri-food sector with Fianna Fáil Brexit spokeswoman Lisa Chambers recently stating that up to 12,500 jobs are at risk.

It’s obviously not just the Republic that will be hit hard by Brexit. A recent report from the Northern Ireland civil service suggests that at least 40,000 jobs would be at risk in the North from a no-deal Brexit.

Further afield, research by academics at Sussex University last year indicated that almost 750,000 jobs could be lost in the UK under a disorderly Brexit, with the biggest job cuts likely in large commuter towns such as Reading and Watford.

As if that weren’t enough, a study from the University of Leuven suggests that a no-deal Brexit could lead to a collective 1.2 million job losses across the European Union.