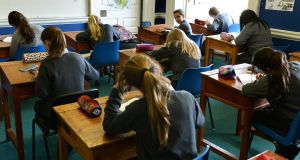 All students will not be able to return to school full-time in September, Minister for Education Joe McHugh has said.

All students will not be able to return to school full-time in September even if social distancing rules are reduced from two metres to one, Minister for Education Joe McHugh has said.

The Department of Education is drawing up measures which schools will be required to take in order to reopen safely in September.

Mr McHugh said the capacity of schools to accommodate pupils will be heavily curtailed even if social distancing rules are relaxed to one metre.

He said his officials were examining the experiences of countries such as Germany, France, Denmark and Greece in reopening their schools and a “model” of measures to be adopted in Irish schools would be drawn up within a fortnight.

In the meantime, he said, “blended learning” – or a mix of being in class and learning remotely – will be a reality in schools when they reopen in September.

“Even with one- or two-metre rule, it is difficult to see all pupils back in September,” Mr McHugh told RTÉ’s Today with Sarah McInerney.

When asked why the State was slower in reopening schools than many other European countries, he said Denmark, for example, was able reopen primary schools largely on the basis that many of them share a campus with secondary schools, which have yet to reopen.

He said while the focus of the department has been on planning for the Leaving Cert and drawing up a new calculated grades process, meetings had been taking place with stakeholders over plans to reopen schools over recent weeks.

Mr McHugh also said his department was examining plans for a “summer programme” of education for children with disabilities and those from disadvantaged backgrounds.

It will be different to the July provision model, which is availed of by about 10,000 students with disabilities, and is likely to feature a mix of remote and in-school learning.

“One thing we’ve identified is that for students with special educational needs and in disadvantaged situations is that we’ve noticed regression, which is why we’re working on a summer programme.”

Opposition politicians have criticised the lack of any firm guidance for schools and families over the reopening of schools.

Sinn Féin spokesman on education Donnchadh Ó Laoghaire said that any school he had spoken to in recent weeks had received “no contact whatsoever” about reopening.

“Even in ordinary circumstances, schools would be in the midst of preparation for the next school year at the moment,” he said.

“Right now, that just isn’t possible because schools don’t know what policies and procedures they might be expected to put in place.

“The reality is that we know a return to school-based learning is important, but that we need to do this safely. We also know that we will have to live with Covid-19 for some time to come and we know a vaccine is not going to appear today or tomorrow.”

He said there were major outstanding questions about how social distancing would be enforced and about capacity in school buildings that are already too crowded and if schools required additional teachers, SNAs or other staff.

Immunology expert Prof Luke O’Neill said there was no scientific evidence to say schools should not reopen, but that it should be done cautiously.

“The evidence is even more compelling that children are not a major problem here, unlike flu. The schools closure is justified if it’s a disease like flu because children pick that up among each other and then they go and spread it at home – that’s why you close schools in a flu pandemic,” he told the Pat Kenny show on Newstalk.

“This is a different virus with different properties – and the more it’s gone on, the more we’ve realised this. Now there’s really more and compelling evidence that kids aren’t a big source of spread.”

Prof O’Neill said that while the studies had, in some cases, been completed after the schools had closed, that had been taken into consideration.

“So if lots of kids go back to school, they’re unlikely to be bringing it back home and secondly they pick up the infection, they get very mild symptoms and they may not even spread it anyway.”

Prof O’Neill said he could not see a reason why a child could not go to school for two days a week, which, for the mental health of the child was extremely important. Medical studies in the past had shown that children kept out of school suffered academically at a later stage.

Vulnerable children who cannot do home schooling benefit from being in school, he added.