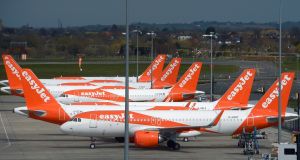 British low-cost airline EasyJet says it will launch a consultation process with its staff in the coming days, joining many of its airline peers in announcing job cuts. Photograph: Nick Ansell/PA Wire

British low-cost airline EasyJet has said it plans to cut 30 per cent of its staff and shrink its fleet to fit the smaller market it expects to emerge from the collapse in air travel due to coronavirus.

EasyJet said it would launch a consultation process with its staff in the coming days, joining many of its airline peers in announcing job cuts.

American Airlines has also announced plans to cut 30 per cent of its management and support staff as it tries to weather the dramatic downturn brought on by the pandemic. The move was announced in a letter to staff from Elise Eberwein, American’s executive vice-president of people and global engagement. Other cost-saving steps include requiring staff to take 50 per cent of their holiday time by September 30th and not allowing untaken days to roll into 2021.

The airline is also offering a new voluntary early-out programme that staff can apply for by June 10th.

“Although our pre-pandemic liquidity, the significant financial assistance provided by the government, and the cash we’ve raised in the capital markets provide a foundation for stability, we need to reduce our cost structure, including our most significant expense – the cost of compensation and benefits,” Ms Eberwein wrote. “We must plan for operating a smaller airline for the foreseeable future.”

The coronavirus outbreak and subsequent travel restrictions have put airlines the world over under immense pressure. United Airlines said in early May it planned to cut at least 30 per cent of its managerial and administrative jobs, while several carriers elsewhere have collapsed or sought bankruptcy court protection, including Latin America’s biggest this week.

American’s chief executive Doug Parker said Wednesday that bankruptcy was not among the options he had consider, pushing back against rumours that the debt-laden carrier would be forced down that route. “Bankruptcy is failure,” he said. “We’re not going to do that.”

“Government aid is helping to keep the industry afloat,” IATA director general Alexandre de Juniac said in a statement. “The next challenge will be preventing airlines from sinking under the burden of debt that the aid is creating.”