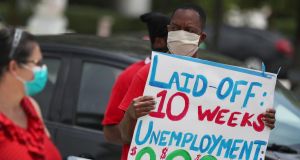 Joseph Louis joins others in a protest at unemployment rates in Florida. More than one in four American workers has now applied for unemployment benefits during the coronavirus pandemic. Photograph: Joe Raedle/Getty Images

More than one in four American workers has now applied for unemployment benefits during the coronavirus pandemic after new figures report a further 2.1 million seeking assistance for the first time last week.

While the latest tally was down from the prior week’s 2.45 million and marked the eighth straight weekly decline, it is still about 10 times the 212,000 average of initial claims in the first two months of 2020, and far above the pre-pandemic record of 695,000.

More than 40 millions Americans have now sought jobless benefit over the past 10 weeks.

The data underscored the deep economic damage caused by coronavirus and the shutdown of restaurants, retail stores and other businesses since government restrictions were imposed, driving the US unemployment last month to its highest rate since Washington started tracking data in 1948.

The latest claims may be not only a result of fresh layoffs, but also evidence that states are working their way through a backlog, the New York Times reported. It added that overcounting in some places and undercounting in others makes it difficult to measure the layoffs precisely.

A total of 40.8 million Americans have filed for unemployment through state programmes since the coronavirus crisis started shuttering the US economy, data released by the labour department on Thursday showed.

Continuing claims, which tallies the number of unemployed who are actively receiving benefits, dropped 3.9 million to 21.1 million, accounting for 14.5 per cent of the workforce.

The pace of new jobless claims slowed again as states have begun to emerge from coronavirus-related shutdowns and restart economic activity.

The seasonally adjusted 2.1 million initial claims last week reflected a drop from 2.4 million a week earlier, which was revised slightly higher. The result as in line with forecasts.

The federal Pandemic Unemployment Assistance programme, which has extended aid to the self-employed or other individuals who would not qualify for regular unemployment compensation, counted 1.19 million new applications. The number of filers during the previous week was revised lower to 1.25 million from 2.23 million, reflecting incorrect data for Massachusetts that inflated the state’s figure by more than one million.