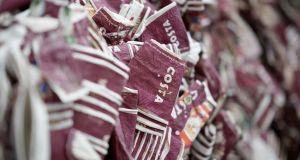 Percentage rise in Easter-related chocolate product launches this year compared with last, according to market research firm Mintel, with the onslaught providing what it called “a plethora of chocolate choice”.

Average weight of the chocolate consumed in 2017 by people in the UK, which has the highest consumption rate in the world, outdoing even the Swiss.

Number of eggs that children in Ireland will consume this Easter (collectively), according to the Irish Heart Foundation, which is calling for a crackdown on “excessive marketing” to kids.

There used to be a widespread perception that disposable paper coffee cups were totally recyclable. Then it was pointed out that they have a plastic lining (that stops the cardboard getting wet), so dumping them in standard green bins is pointless. But it’s not the case that it is completely impossible, technically speaking, to recycle the takeaway cups used by the major chains. There are a small handful of specialist recycling facilities that can separate the polyethylene coating from the paper – these cups from Costa Coffee await recycling at a plant owned by UK paper producer James Cropper. So maybe, as well as joining in the fashion for bring-your-own reusable cups, the time has come to put pressure on cafe companies to funnel more of their cups into these specialists facilities and then create demand for a lot more of them to be built.

The torturous complications and contradictions of Brexit would fill a thick lexicon all by itself, so if you haven’t already met the “evolution clause”, welcome to the most optimistic jargon doing the rounds in Brussels right now. Essentially, the European Union’s draft guidelines for its negotiations with the UK on its future trading relationship has a built-in clause that will allow the EU to offer a more generous deal in the event British prime minister Theresa May softens her stance on her “red lines”. This has been interpreted as a “gauntlet” being thrown down to the UK to compromise on its economy-sabotaging “red lines” and stay in customs union and single market, which apparently some diplomats in Brussels still believe could happen. This “evolution clause” will cease to be come October, the deadline for agreeing the terms of the UK’s withdrawal.

Getting to know: Charlie Lagarde

Charlie Lagarde is a teenager from the province of Quebec in Canada who won the lottery after buying her first ever scratch card to celebrate her 18th birthday. So far, so lucky. But not every lottery winner is as smart as Lagarde. She was given the choice of taking a taxable Can$1 million (€626,000) lump sum or an untaxed payment of $1,000 (€626) a week every week for the rest of her life. Some of us would have just taken the jackpot and flown first-class to the nearest private island, but Lagarde consulted a financial adviser and took the $1,000-a-week option, a decision hailed by personal finance experts as “sensible” and also far more lucrative in the long term – netting her possibly three times as much – given her young age. Lagarde plans to use the money for her education and to travel, her plan being to study photography and her dream being to work for the National Geographic.

Companies and organisations of a certain size in Britain have until April 4th at the latest to report their gender pay gap. About 86 per cent of the cases reported so far have involved men being paid more than women. But where were the most embarrassing pay differentials to be found? Here are five of the worst.

1. HSBC: With a gender pay gap of 59 per cent based on mean hourly earnings, men who work for the male-dominated bank are paid more than twice as much as women.

2. Deloitte: Women earn 43 per cent less than men on average at the accountancy firm, in part because their partners tend to be male.

3. British American Tobacco: Women make up more than half of its graduate intake each year, but somehow their earning potential appears to go up in smoke after that, resulting in a 36 per cent pay gap.

4. The Daily Telegraph: Stop all the presses for this shocking development that a newspaper pays men more than women – in this case, 35 per cent more.

5. Burberry: Women make up 70 per cent of the luxury fashion group’s employees, but will be less able to afford its goods, as the company has a 26 per cent gender pay gap in favour of men, who get higher bonuses too.