Chris Johns: Angst at globalisation is at the heart of Trump’s appeal, Brexit and general populism 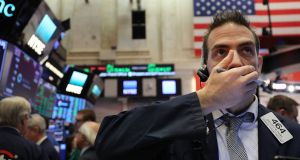 Markets had begun to hope that Trump’s bellicosity was just hot air. The fear now is that he is going to deliver on his promises

How worried should we be about renewed stock market turbulence in the wake of Donald Trump’s imposition of trade tariffs? It has been said countless times that equities forecast eight out of five recessions: that’s a way of trying to calm ourselves down, appropriately so, when financial markets start misbehaving.

Asset prices often do strange things in ways that defy rational explanation. An army of analysts exist to try to put a narrative structure around events that are sometimes beyond human capacity to understand. Equity price falls can sometimes be a signifier of nothing. But they can also be a powerful signal of trouble ahead. The trouble is we don’t really know how to interpret them.

The case for worrying this time around is unfortunately quite strong. If tariffs are wide ranging enough and last a long time, economic growth will be lower. China has already retaliated to Trump’s latest imposition of tariffs, confounding those commentators who hoped that Xi Jinping would be smart enough not to respond. If it gets bad it is perfectly possible that the currently robust global economic recovery could be sent into reverse.

Trump’s motivation for a trade war has been clear since before he became president. He believes that the US trade deficit with China, in particular, is a bad deal for America. Astonishingly, he views that deficit as a kind of profit and loss account.

Angst about world trade – globalisation – is at the heart of Trump’s appeal, and is also a driver of Brexit and populism generally. The response of the middle political ground has been poor to non-existent.

One of the reasons why Trump still has a significant base and Brexit voters have not changed their minds is that there has not been a sufficient response by policymaker to the concerns of the left behind. The populist thesis is that globalisation has cost too many people their jobs. If you are a coal miner, steel worker or car factory employee it is an easy idea to buy into. And like all great lies it comes wrapped around a kernel of truth.

The benefits of free trade have been known for years. Anyone who takes even a basic economics course learns about comparative advantage and the almost magical benefits from exports and imports. But these gains can be counter-intuitive. And sometimes tough to understand. And economists have known for years that there is a dark side to their overwhelming enthusiasm for free trade.

Gains from trade flow unevenly. Particularly for economies that have less than full employment. That free trade can create both winners and losers has been a secret that economists have been reluctant to discuss, and then only behind the closed doors of seminar rooms. The explanation has always been that if the downsides of free trade are talked about openly this will merely feed the beast of protectionism.

Indulging in a trade war is the exact opposite of what should be done to help the losers from trade. The trouble is that in the US in particular, but also elsewhere, too little attention has been paid to the left behind. And those same people will now be hurt by the things they vote for: protectionism and Brexit.

It is also the case that free trade benefits newly developing economies the most. Fully developed nations like the US do gain from further opening up of trade but the pluses are not nearly as large when compared to those accruing to China.

That might look uneven but to protest would be to deny the right of poorer economies to grow as fast as they can. Poverty has fallen dramatically in China, in the US not so much. Better redistribution of the undoubted economic growth boost to the US is the right response to globalisation, not protectionism. Denying economic development to poorer countries is a peculiar moral judgement.

Stock markets are right to be nervous about a trade war. But that’s not the only thing they have to worry about. US stocks, in particular, are widely thought to be overvalued. That’s not a good starting point for a possible growth slowdown.

Markets had begun to hope that Trump’s bellicosity was just hot air. The fear now is that he is going to deliver on his promises. Many people in Asia are growing concerned about potential conflicts given the hawkish nature of Trump’s recent cabinet appointments. There are hints that Europe’s growth rebound may be pausing for breath.

And then there is tech. The Facebook farrago is merely one aspect of a wider debate. It’s about privacy of course, but also simple economics. Think of it this way: data is an asset which yields handsome, lightly taxed income for its holders. But accounts have to add up: somewhere in the system there are unrecognised liabilities corresponding to those assets. Whose liabilities are they?

The income from data also has a corresponding expense. Which is not yet being recognised. When the accounting treatment of tech is done properly there will be lot of share prices lower than they are now.