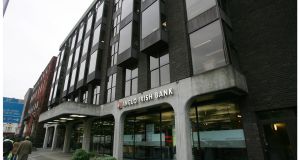 The Central Bank has sold a further €500 million of bonds dating from a restructuring five years ago of the State’s bailout of now-defunct Anglo Irish Bank.

The Central Bank received €25 billion of Government bonds in February 2013 under a restructuring of so-called promissory notes, which had been used by the State during the financial crisis to rescue Anglo Irish, which was subsequently renamed Irish Bank Resolution Corporation (IBRC).

IBRC had been using the promissory notes as collateral for emergency central bank funding. When it was put into liquidation, the State replaced these notes with long-term bonds of up to 40 years in duration.

The Central Bank has been under pressure from the European Central Bank to sell these bonds at pace, to ease concerns that the refinancing amounts to monetary financing, which is prohibited in the euro zone.

The latest transaction, announced on Wednesday, brings to €10.5 billion the amount of bonds that have been sold to date to the National Treasury Management Agency (NTMA), which has duly cancelled the notes. That equates to 42 per cent of the par value of the bonds.

Debenhams to shut all stores in Republic with loss of 2,000 jobs 19:33
European shares post best week since 2011, focus on EU stimulus 19:07
Dutch go out on limb in fractious negotiations on aid for fellow EU states 19:00
Cybercriminals actively exploiting coronavirus pandemic 18:56
DAA to put most of its 3,500 workers on a four-day week 17:56

1 IMF chief says pandemic will unleash worst recession since Great Depression
2 Debenhams to shut all stores in Republic with loss of 2,000 jobs
3 Dutch go out on limb in fractious negotiations on aid for fellow EU states
4 Lockdown exit: How can Irish economy reopen without big health risks?
5 Irish Times cuts senior manager and editor pay by up to 30%
6 DAA to put most of its 3,500 workers on a four-day week
7 Ireland’s financial reputation: why this time it is different
8 Facing economic meltdown ... and nothing wrong with our economy
9 Property market has not felt full impact of Covid-19, warns Sherry FitzGerald
10 Deliveroo branches into grocery deliveries in Ireland
Real news has value SUBSCRIBE