Is there political method in Trump’s trade madness? 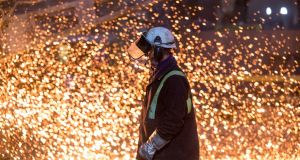 Viewed from the standpoint of big business and classical economics, Donald Trump’s increasingly protectionist trade policy has looked like a collection of impetuous acts of economic self-harm in recent weeks.

But is there political method in the economic madness?

Ordering new tariffs on up to $60 billion (€48.5 billion) in Chinese imports on Thursday, Mr Trump declared that his administration was out to punish Beijing for its systematic theft of American intellectual property and reverse the loss of US factory jobs.

“We’re doing things for this country that should have been done for many, many years,” he declared.

The president then added: “It’s probably one of the reasons I was elected; maybe one of the main reasons.”

With his move against China this week, Mr Trump has delivered on campaign promises to take on Beijing and fight back against what he and many of his supporters see as a trade war that China has been waging against the US and its industrial base for decades.

In a midterm election year when Mr Trump’s Republicans could lose control of Congress, the irony is that the president’s moves are attracting more support from Democrats than from within his own party.

“I don’t agree with president Trump on a whole lot, but today I want to give him a big pat on the back. He is doing the right thing when it comes to China,” said Chuck Schumer, a long-time China hawk who leads the minority Democrats in the Senate.

Many Republicans believe the recent tariffs on steel and aluminium, which went into force on Friday, and the impending tariffs on China are likely to do more harm than good to the US economy.

They also worry that they will undermine the economic benefits of tax cuts they pushed through late last year, which congressional Republicans consider their strongest argument in a difficult election year.

Mr Trump, however, seems to believe he can please both camps.

His embrace of steel and aluminium tariffs was a victory for the economic nationalists in his team - and a defeat for Gary Cohn, who then resigned as the president’s chief economic adviser.

Yet on Thursday, Robert Lighthizer, Mr Trump’s trade tsar, told Congress that besides Canada and Mexico, the US would also, at least temporarily, exempt the EU, Brazil, Argentina, Australia and South Korea.

Altogether, the exempted countries accounted for more than half of US steel imports last year. So the carve-outs will put a big dent in an action intended to create new steel jobs. They will also reduce the collateral impact on other steel-consuming sectors that concerned Republicans.

Although it provoked a tumble in financial markets, Mr Trump’s China move is also being rolled out more deliberately than the steel penalties, with plenty of opportunities for US businesses and Republican lawmakers to try to blunt the effects.

A tougher stance against China is broadly popular in Washington. “This is the first time in a long time that we have a president that knows how to negotiate,” James Inhofe, a Republican senator from Oklahoma, told Fox News. “I’m kinda glad the Chinese embassy called up and said they didn’t like it. That makes me happy.”

But the long-term political fallout may turn out to be more awkward.

The $50 billion to $60 billion of Chinese trade earmarked for tariffs amounts to roughly 10 per cent of US imports from China last year.

The US exported a record $130 billion in goods to China in 2017. Agricultural products are an important part. The US exported $14 billion of soyabeans last year.

China has drawn up its own list of retaliatory measures that includes some agricultural products. It has left off soyabeans - for now. But US farmers have reason to worry about a trade war as they enter this spring’s planting season.

A US plan to impose new investment restrictions on China, which the Treasury has 60 days to compile, also risks blowback.

Mr Trump touted more than $250 billion in Chinese deals on his trip to China last November. Yet many of those deals, including some involving major US-based multinationals such as Boeing, Caterpillar and GE, may now be vulnerable.

The largest among them is an $83 billion investment by Chinese energy company Shenhua in shale gas and petrochemical projects in West Virginia - a state that Mr Trump won in 2016 and where he has promised jobs to replace an ailing coal industry.

Wendy Cutler, who oversaw negotiations with China as a deputy US trade representative in the Obama administration and is now at the Asia Society, said Mr Trump’s move would likely lead to a destructive trade war and would unlikely be his final protectionist act.

Nobody could argue his trade policy was all bark and no bite, she said. “We are seeing a lot of bite right now.”