Irish companies no longer ‘deer in headlights’ on Brexit 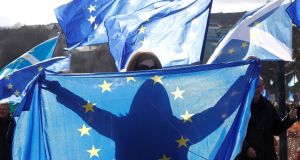 BoI’s latest Economic Pulse survey detects “tentative signs” that uncertainty posed by the UK’s decision to leave the EU is becoming “less of a drag” for businesses. Photograph: Reuters/Russell Cheyne

Irish companies are moving beyond their “deer in headlights” phase when it comes to the prospect of Brexit, a Bank of Ireland study suggests.

The bank’s latest Economic Pulse survey detects “tentative signs” that uncertainty posed by the UK’s decision to leave the European Union is becoming “less of a drag” for businesses.

Among the companies that will face an impact from Brexit, the number putting their investment plans on hold as a result has dropped to 44 per cent, compared to 53 per cent in March 2017, when British prime minister Theresa May triggered Article 50.

“Interestingly, the Bank of England is seeing a similar trend among UK businesses. While it is early days, this suggests that firms may be starting to move beyond the ‘deer in headlights’ phase,” said Loretta O’Sullivan, Bank of Ireland’s group chief economist.

The transition period agreement reached between the UK and the EU will give companies “breathing space” to plan for the next stage, she added.

More than half of households expect the economy will improve in the next 12 months, according to the survey. Overall the economic mood of the nation has improved for the third month running, it found.

Business confidence reached a 21-month high, despite a temporary dent to construction activity from severe weather as the “Beast from the East” and Storm Emma hit Ireland. Some 53 per cent of building firms reported that this had impacted their activity.

Consumer sentiment was slightly softer, with households more cautious about their personal finances.

“On the consumer front, confidence was down a little this month but the overall picture remains bright,” said Dr O’Sullivan. “It is a case of tailwinds abounding.”

The survey of more than 1,000 households and more than 2,000 businesses was conducted on behalf of Bank of Ireland by Ipsos MBRI.