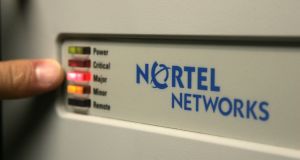 When Nortel failed, its defined benefit pension plan had more than 40,000 members but had been running a deficit of more than £2 billion. Photograph: Reuters

Former Nortel workers in the North who were members of the failed telecom group’s UK pension plan are to get a share of an estimated £500 million (€570 million) that is to be injected into the plan from the sale of the Canadian group’s former assets.

Nortel, which at one time employed around 1,000 people at a 34-acre plant in Monkstown, outside Belfast, collapsed in 2009 leaving nearly 230 of its workers in the North without notice or redundancy pay.

Nine years later, trustees of the Nortel UK pension scheme have confirmed it is to receive £550 million which will enable it later this year to exit the UK’s Pension Protection Fund (PPF) assessment – which provides compensation to members of eligible defined pension schemes in the event of an insolvency.

When Nortel failed, its defined benefit pension plan had more than 40,000 members but had been running a deficit of more than £2 billion.

David Davies, chairman of the trustee board of Nortel Networks UK Pension Plan, said “after nine long years” former workers could now look forward to the end game and he paid tribute to the UK’s PPF and advisers Hogan Lovells and PwC, for helping the trust to secure the pensions that former Nortel employees had worked for.

The trustees estimate more than £1 billion has now been recovered from Nortel’s insolvency proceedings for the pension plan and together with the latest £550,000 injection, this should be enough to “ fulfil our dream of being able to buy sufficient member benefits to ensure we can exit the PPF assessment and proceed to buyout with our chosen insurance partner”.

Jonathon Land, head of PwC’s pensions credit advisory practice and adviser to Nortel’s UK pension trustees over the last decade, said everyone’s hard work would now enable “extra money to be placed into the pockets of pensioners, who helped to generate Nortel’s assets.”

But Mr Davies also added: “That money will be some compensation to the members and the beneficiaries of those who have died along the way. However, we have to recognise that still leaves many members short of their full plan benefits.”