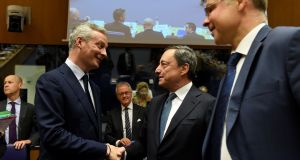 Taoiseach Leo Varadkar has said that he expects to see no upward movement in interest rates following a presentation by the European Central Bank president Mario Draghi at the European summit in Brussels this morning.

Mr Draghi briefed EU leaders on interest rates policy and on the bank’s quantitative easing programme this morning as they gathered for the second day of the two-day European Council summit.

A spokesman for Mr Varadkar said that having heard the presentation from the ECB chief, Mr Varadkar expects no interest rate rises.

Mr Draghi confirmed to EU leaders his objective to reach a real inflation rate of close to or just below 2 per cent in the euro zone over the medium term.

While the euro zone economy is growing and unemployment is falling, underlying inflation is not rising because wage growth has not yet picked up.

In his presentation, Mr Draghi said the slow price growth meant that the bank’s accommodative policy would stay as it is for now.

Underlying inflation, the measure of price growth that excludes volatile unprocessed food and energy costs, edged up to 1.2 per cent year-on-year in April from 0.8 per cent in March, but then eased again to 1 per cent in May.

But Mr Draghi said he expected wage growth to pick up in coming months. Mr Draghi said that sentiment was improving because one of the major uncertainties weighing down confidence last year was dispelled as new hope emerges about the future of the European Union, despite Britain’s decision to leave. Mr Draghi quoted US economist Larry Summers, the former top economic adviser to president Barack Obama, that “confidence is the cheapest stimulus”.