Hard Brexit with no trade deal could slash cross-Border trade 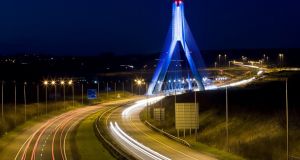 The research finds that the goods trade from the south to the north would likely be hit harder by the imposition of WTO tariffs together with customs checks, with the food and agricultural and textile sectors most affected.

The €2.6bn cross-border trade in goods could fall by up to 17 per cent if Brexit occurs without a trade deal in place leading to the fallback position of the imposition of World Trade Organisation (WTO) tariffs, according to new research.

The imposition of such tariffs is cited as the “worst case scenario” of a hard Brexit in the study, which was commissioned by Intertrade Ireland and conducted by the ESRI.

The research finds that the goods trade from the South to the North would likely be hit harder by the imposition of WTO tariffs together with customs checks, with the food and agricultural and textile sectors most affected.

The study takes into account the potential imposition of tariffs, in addition to the effect of possible non-trade barriers (NTBs) such as customs checks and labelling requirements, as well as weakness in sterling.

It finds that in a “base case” scenario, comprising the imposition of WTO tariffs with no NTBs, trade from south to north, which was worth €1.65 billion last year, would drop 8 per cent. North to south goods trade, worth €1.05 billion, would fall 11 per cent.

A scenario that takes into account the tariffs, NTBs and also a 10 per cent fall in the average value of sterling across 2016, would result in a 21 per cent fall in goods trade from south to north.

The effect on north to south trade would still fall by 11 per cent, with the overall impact on cross-border trade calculated at 17 per cent. The effect on the north would be cushioned by weaker sterling, which helps its exporters.

Meat and dairy sectors would be most acutely affected, with exports of beef from the south hit hardest. In trade from the north to south, half of the overall impact would be attributed to tariffs and NTBs on milk and cream.

Aidan Gough, strategy and policy director of Intertrade Ireland, said the cross-border agency’s research suggests that 98 per cent of businesses north and south have no plan in place to deal with the effects of Brexit and tariffs.

“We need to spur them into action,” he said.

Mr Gough highlighted that the research does not make the prediction that WTO tariffs will be introduced, but rather it assess what would happen if the worst case scenario were to transpire.

“Plan for the worst and hope for the best. It is very clear that the food sector would be worst affected, especially small business and micro enterprises. On a positive note, most products would see tariffs of less than 10 per cent.”