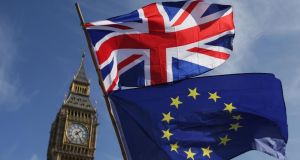 Rock-hard Brexit: Theresa May’s legacy will be the lessons learned when you adopt the ideology of Nigel Farage. Photograph: Daniel Leal-Olivas/AFP/Getty

It is tempting but wrong to describe the political chaos in the UK as unprecedented. In 1974, for example, Prime Minister Ted Heath called a general election to ask the question “Who governs Britain?”

It was a time of economic decline, power cuts, widespread strikes and a three-day week. The country answered with a sullen “don’t know”: no one party achieved a working majority and Heath ending up resigning after failed attempts to do a deal with the Liberal Party.

The portents don’t look good for Theresa May. As in 1974, the British people have told the political classes to stop asking stupid questions and to govern from the centre. May lost because she tried to rule from the headbanger wing of the Tory party. She’s still at the same game.

Until the past few days few in Britain were even aware of the existence of the Democratic Unionist Party, let alone what it stands for

At least Heath tried to link up with a party the British had heard of. Until the past few days few in Britain were even aware of the existence of the Democratic Unionist Party, let alone what it stands for. Old and new media are now awash with descriptions of homophobia, creationism, climate-change denial and the DUP’s refusal to negotiate on Sundays.

Initial reaction suggests most Brits are incredulous that May is so desperate to cling to office that she is willing to deal with people who have little in common with mainstream Conservatives (let alone anyone else). Many of us see the DUP deal in stark terms: May wanted to lead us out of the European Union; now she wants to lead us backwards out of the 21st century.

The only thing keeping May in power is Tory fear that toppling her could set off a cascade that would put Jeremy Corbyn into Downing Street. As soon as someone works out how to get, say, Boris Johnson safely ensconced as prime minister, May will be deposed.

Nick Timothy, May’s deposed joint chief of staff, got something right in his farewell statement when he declared that the UK is a divided country

As all of this unfolds nothing of any consequence will happen. The United Kingdom’s pressing infrastructure needs will continue to be neglected, the National Health Service’s financing crisis will gradually get worse, and no rational Brexit plan will be put together. Nick Timothy, May’s deposed joint chief of staff, got something right in his farewell statement when he declared that the UK is a divided country.

The electoral map of Britain starkly illustrates that divide. Rural England is solidly Tory, with only very few exceptions. Cities – including London – and poorer areas, like the north of England or much of south Wales, are Labour hunting grounds. This is one of the divides described by Timothy: rural versus urban.

Another is the division between young and old. But it’s also an economic thing, Labour benefiting from those left behind by inequality. Additionally, in places like London, richer people voted Labour, something that old-fashioned liberals have always done. Effete dilettantes or champagne socialists: either way, Labour is attracting back at least one part of its traditional base.

At least 57 per cent of the electorate rejected May’s vision of a rock-hard Brexit. It’s probably much higher than that, as nearly 29 per cent of the Scottish electorate voted for Tories led by a self-declared soft Brexiteer, Ruth Davidson. That won’t stop the Conservative Europhobes and Nigel Farage, who are already fanning out to declare that nothing has changed and to warn darkly about the consequences of Brexit betrayal.

If reason is to prevail – a big if in the febrile state of British politics – a cross-party coalition must be formed to both plan and to negotiate a softer Brexit that more people can sign up to. At least one consequence must flow from that: Brexit must be delayed, possibly for a long time. Assuming a large majority, May was nevertheless muttering about “transitional arrangements” that implied a delay beyond the two-year timetable. My guess is that we are now looking at something like five years.

The fault lines exposed by last Thursday’s UK general election have to be addressed. These must include the cost of housing in southeast England. Somehow, prices and rents have to fall; someone needs to work out how to build many more homes. My guess is that, for all sorts of reasons, we have now seen the peak of UK property prices.

Future historians  will undoubtedly write about the stain left on the UK by the rise and now, with luck, the fall of Ukip

One of the greatest novels of the 20th century, Philip Roth’s The Human Stain, explores the mark that we leave on this earth – the stain – around themes of racism and alienation. Future historians and novelists will undoubtedly write about the stain left on the UK by the rise and now, with luck, the fall of Ukip.

Theresa May’s legacy will be the lessons learned when you adopt Farage’s ideology. The Republic of Ireland should quietly congratulate itself on the contrast it offers the world: a country ruled from the centre, at ease with itself and led by a young, mixed-race, socially liberal and economically pragmatic politician. Leo Varadkar just needs to watch house prices.