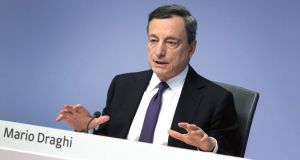 ECB president Mario Draghi. The move to end QE comes at a time when the euro zone is in the throes of an economic slowdown after a bumper 2017. Photograph: Daniel Roland/AFP/Getty Images

The European Central Bank has kept interest rates on hold as president Mario Draghi prepares for a grilling over just how dovish the bank’s message on interest rates really is, while also confirming plans to halt bond purchases in December.

The bank’s governing council opted to leave the main refinancing rate at zero at one of its regular meetings in Frankfurt on Thursday morning. The 25 rate-setters also said the levy charged on a portion of private lenders’ deposits parked at central banks around the region would remain at 0.4 per cent.

ECB policymakers reiterated that they expected to keep rates on hold at record low levels “at least through the summer of 2019”. The ECB would also continue to reinvest the proceeds of securities bought under its €2.5 trillion quantitative easing programme but which have now matured “for an extended period of time” after the bank stops expanding QE at the end this year.

Markets barely reacted to the ECB decision, which matched the expectations of most economists. The euro remained broadly flat against the dollar, hovering around $1.17, down just over 0.1 per cent on the day.

The meeting is the first since last month when the ECB moved to end quantitative easing by halving the amount of new bonds it buys each month from €30 billion to €15 billion in September before ending the purchases in December. – Copyright The Financial Times Limited