EU in last-minute attempt to avert trade war with US

Juncker to meet Trump over tariffs on cars 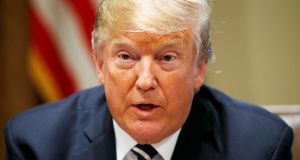 Jean-Claude Juncker, president of the European Commission, will meet Mr Trump in Washington on Wednesday, in a meeting that EU officials said would be aimed at “de-escalating” tensions by exploring “various avenues” for trade talks.

Brussels will make a last-ditch attempt to convince Donald Trump not to go ahead with punitive tariffs on the EU car sector, even as hopes diminish that a full-blown trade war with the US can be avoided.

Jean-Claude Juncker, president of the European Commission, will meet Mr Trump in Washington on Wednesday, in a meeting that EU officials said would be aimed at “de-escalating” tensions by exploring “various avenues” for trade talks.

But, in a sign of the seriousness with which Brussels is taking the threat to its car exports, the European Commission is also pressing ahead with work to identify US products that could be hit with retaliatory tariffs if the initiative fails.

One senior EU official said that the European Commission is considering different options, including potentially hitting €10 billion of US products with 20 per cent tariffs, or opting for a longer list of €18 billion of goods on which lower levels of additional duties could be applied. Products being lined up for inclusion on the list include suitcases, construction vehicles and photocopiers.

Mr Juncker’s trip comes after repeated threats from Mr Trump to hit some €50 billion of EU-made cars and car parts with additional tariffs, which the US president has indicated could be set at 20 per cent.

That rhetoric has escalated in recent days, with the US president this month describing the EU as “a foe” that has “taken advantage” of the US on trade. Mr Trump has already applied punitive tariffs to EU steel and aluminium exports, and is engaged in a widening trade war with China. The US administration is currently investigating whether car imports constitute a national security threat.

Brussels preparations to retaliate are guided by its assessment that any US move to hit cars would violate World Trade Organisation rules, so allowing the EU to take countermeasures within certain legal limits.

EU trade commissioner Cecilia Malmstrom, who will accompany Mr Juncker on the trip to Washington, said last week that the aim was to “try to see how we can work together” to address trade concerns. “Let’s approach this like the allies and partners we are,” she said, adding that the visit would also involve meetings at the US Congress and with other administration officials.

Ideas sketched out by Brussels include the prospect of “plurilateral” talks between the world’s major car exporting countries on a tariff-reduction deal or bilateral negotiations between the EU and US on a trade agreement that would lower tariffs on a wider range of industrial goods.

But both national capitals and EU officials have played down the possibility of a breakthrough, not least because the US has given little sign that it is interested in the kinds of international negotiations that Brussels is suggesting.

“No one is optimistic,” said one senior EU diplomat.

Mr Juncker also faces a delicate balancing act after a large number of governments, including France and the Netherlands, made clear at a meeting of senior diplomats last week that the EU must not negotiate under threat. EU diplomats said that this meant detailed talks could only begin once Mr Trump drops his steel and aluminium tariffs and ends his threat to cars, and that any deal with the US would have to offer equal benefits for both sides.

Germany, whose large car sector would bear the brunt of US tariffs, has taken a noticeably softer line, stressing the need to explore all options for preventing a trade war that German chancellor Angela Merkel warned last week would represent “a real danger for the prosperity of many people in the world”.

But EU diplomats said that the difference at this stage was still largely one of emphasis - with the bloc united on key points such as its rejection of unilateral concessions to the US. “We are not in the business of going there with any offers,” said one EU official. “It’s a first exchange of views between the two.”