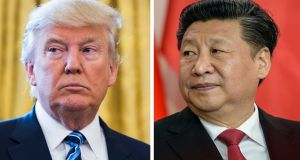 The prospect of a full-blown trade war grew on Friday after Angela Merkel warned of the economic damage of US tariffs even as Donald Trump said he was ready to impose duties on $500 billion (€426 billion) of Chinese imports.

The US president escalated tensions with trading partners in a series of attacks on social media and TV, accusing China and the EU of manipulating currencies to hurt the US on trade. The latest salvo came as Jean-Claude Juncker, president of the European Commission, prepares to travel to Washington next week for talks aimed at cooling trade tensions.

“For years we’ve been losing $150 billion with the EU ... and they’re making money easy,” Mr Trump told CNBC, adding that he was prepared to step up the trade war with China because it “was the right thing to do for our country”.

Speaking at her annual summer press conference in Berlin on Friday, the German chancellor outlined possible responses to the threat of US tariffs on European cars but said that they represented “a real danger for the prosperity of many people in the world”.

The imposition by the US of tariffs on EU exports of automobiles may contravene World Trade Organisation rules, she added, saying the EU was working on “countermeasures” to the potential tariffs, but that this was “by far the worst solution”.

Dr Merkel said the IMF and other institutions were downgrading forecasts for economic growth over fears of a global trade war. She added that the world would not have overcome the financial crisis of 2008 if countries had acted unilaterally the way the US administration is now.

In recent months Mr Trump has significantly increased the pressure on China and the EU to tackle trade surpluses with the US. The US president has also worried many European allies by conflating trade and security issues.

Beijing has retaliated in kind to the tariffs imposed so far. Mr Trump’s administration this month released a list of proposed tariffs on a further $200 billion worth of Chinese goods, ranging from auto parts and food ingredients to construction materials.

European stock markets fell after Mr Trump’s remarks emerged, led by the sectors exposed to the threat of a deeper trade dispute such as carmakers.

Chinese officials say they do not know how to deal with Mr Trump, with some in Beijing concluding that it would be hard to reach any deal ahead of the US midterms in November.

“We want to buy more from the US, but they will not let us. We want to invest more in the US, but they do not want us,” a Chinese official told the Financial Times, saying China and the US had made progress in four rounds of trade talks in recent months and were perplexed at what had triggered the breakdown.

One Chinese official said Beijing was unclear how seriously to take the president’s threats to escalate, wondering whether Mr Trump’s hard line might abate after the November polls.

Mr Trump told CNBC: “I’m not doing this for politics, I’m doing this to do the right thing for our country.” He added: “We have been ripped off by China for a long time.”

The White House is conducting a national security investigation into automotive imports – a possible harbinger of tariffs on imported cars from Europe, which would be particularly damaging for German carmakers.

Last month Mercedes parent Daimler issued a profit warning triggered by China’s threat of retaliatory tariffs against the US. These would force the company to ship fewer of the sport utility vehicles that it builds in the US to China this year.

“One can see just how closely these global economic [supply] chains are intertwined,” Ms Merkel said, noting that German carmakers produce 400,000 cars a year in the US, which are exported to other parts of the world. BMW’s largest factory was, she said, not in Germany but in Spartanburg, South Carolina.