Latest CSO figures show that property values advanced by 12.1% in the year to October 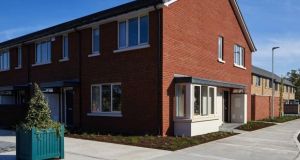 Grace Park Wood in Drumcondra, Dublin. Latest figures from the Central Statistics Office show that prices in the capital have now soared by 86.4% since the market crashed.

The latest price increase means that from the trough in early 2013, prices nationally have increased by 70.2 per cent, with price growth in Dublin driving the recovery. In the capital, residential property prices have rocketed by more than 86 per cent since the market crashed but in the rest of the country prices have risen by just 62 per cent.

Acccording to Dermot O’Leary, economist with Goodbody Stockbrokers, the latest price growth means that prices are now 24 per cent below peak levels, having been 55 per cent below at the worst point, which means that “the vast majority of negative equity will be eradicated over the coming two years”.

The figures also show a substantial rise in the number of market transactions, up by 10.5 per cent on the year to 3,906, and up by 6.6 per cent on September. There was also a significant increase in new home sales, up by 41 per cent on October 2016, while 1,142 first-time buyers made a purchase during the month, up by 23 per cent on the same month in 2016. Of these, 27 per cent were for new homes.

Alan McQuaid, economist with Merrion Capital, expects prices will continue to rise until Government measures aimed at boosting supply start to have an impact.

“We see house price growth staying in positive territory on a year-on-year basis for the foreseeable future, with the annual rate of increase now looking like it’s set to remain in double-digits for the remainder of 2017 and well into 2018,” he said.

However David McNamara, analyst with Davy, expects house price growth to ease to about 8 per cent in 2018, as the impact of the recent changes to the Central Bank mortgage lending rules start to kick in.

“The new rules should dampen house price inflation in 2018, particularly in the capital, Dublin, where affordability is most stretched,” he said.