Republic one of two countries most affected by ECB asset purchases, says Moody’s 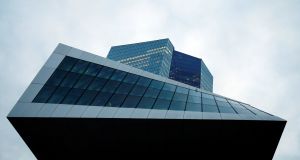 The Republic is one of the two countries most affected by the European Central Bank’s (ECB) asset purchase programme, a report from ratings agency Moody’s has said.

In a review of the impact of the ECB’s programme, Moody’s said that asset purchases lowered 10-year government bond yields by between 50 and 150 basis points across major euro area countries with Ireland and Portugal seeing the largest impact.

In Ireland’s case, Moody’s analyst Colin Ellis said that bond yields were down by more than 140 basis points.

Following the onset of the financial crisis, the ECB adopted a number of measures to deal with the deterioration in economic and financial conditions, one of which was the asset purchase programme.

Moody’s suggests the public sector purchase programme (PSPP), whereby the Eurosystem buys €60 billion worth of bonds per month, is just one of a number of variables affecting euro zone bond yields.

However, Davy global strategist Donal O’Mahony noted that Moody’s model does not capture all of those variables. He said Irish government bond yields and spreads declined significantly from early-2017 onwards despite the ECB ultimately rowing back on its purchase of Irish government bonds.

The PSPP imposes a purchase limit of 33 per cent on the amount of outstanding bonds of each sovereign issuer held in official hands. With official holdings of Irish bonds already bloated by previous interventions between 2010 and 2014 – not least related to the IBRC liquidation – this meant that the ECB was obliged to taper the amount it was spending on Irish bonds much earlier than was required for other sovereign bond markets.

Mr O’Mahony notes that PSPP purchases of Irish bonds have nearly halved in 2017 relatively to last year, and yet Irish government bond yields and spreads have continued to decline.