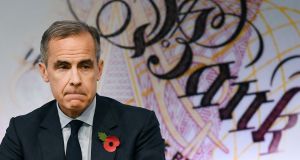 Bank of England Governor Mark Carney is to explain why price growth is so far above target.

UK inflation unexpectedly accelerated to the fastest in more than five and a half years in November, forcing Bank of England Governor Mark Carney to explain why price growth is so far above target.

Consumer prices rose 3.1 per cent from a year earlier, driven by the cost of air fares and computer games, the Office for National Statistics said on Tuesday. That’s up from 3 per cent in October and the highest since March 2012.

The pound initially climbed after the data before erasing its advance.

The latest reading means Mr Carney is now compelled to write to Chancellor of the Exchequer Philip Hammond explaining why inflation is more than 1 per centage point away from the official 2 per cent target.

The letter will be published alongside the BOE’s policy decision in February, rather than this week, as the Monetary Policy Committee has already started its meetings for its December 14th announcement.

The inflation rate in November was faster than the 3 per cent pace forecast by economists in a Bloomberg survey. Core inflation, which excludes volatile food and energy prices, was unchanged at 2.7 per cent, also the highest since 2012.

While headline inflation is forecast to ease through 2018, BOE officials increased their benchmark interest rate last month for the first time in a decade to keep a lid on domestic price pressures.

They said low unemployment and a squeeze on supply could fuel faster wage growth, one of their key metrics.

Inflation in 2017 was pushed higher by the weaker pound after the Brexit vote. That forced up import prices, eroding living standards for British workers as wages fail to keep pace.

Upward pressure on inflation last month came from the price of computer games and air fares falling less than they did a year earlier, as well as fuel prices, the ONS said.

Higher chocolate prices saw food and non-alcoholic drink rise 4.1 per cent in the year through November, the fastest since 2013.

Oil prices climbed last month, and the effect was seen in factory input prices, which rose 1.8 per cent, the most in three months. There could be further pressure in December after disruptions to a key North Sea pipeline sent crude prices to their highest in two and a half years.

Input prices are up 7.3 per cent from a year earlier but competition has forced manufacturers to absorb some of pressure, with output prices increasing just 3 per cent over the same period.

Aryzta’s revenue trends improved in July but income still down 18% 08:06
Apple’s $250bn Irish dividend, Bank of Ireland’s U-turn, and the cost of divorce 06:30
Stocktake: A record-breaking cheating season 05:50
Transferring the family farm without a tax headache 05:50
Stocktake: Tech stocks have taken over the market 05:40

1 ‘No demand... because there are no people’ at well-known Dublin pub
2 Apple’s $250bn Irish dividend, Bank of Ireland’s U-turn, and the cost of divorce
3 Divorce: What will it cost and can you afford it?
4 Transferring the family farm without a tax headache
5 Apple received $250bn dividend from Irish subsidiary in 2019
6 Nearly 30,000 could lose pandemic payment if they do not confirm eligibility
7 Pmask coverings likely to suit meat plant workers, founder says
8 UK criticised for ‘unforced errors’ on post-Brexit trade deals
9 Buying a second home now that we work from home
10 ‘Humble’ Airbnb going back to basics
Real news has value SUBSCRIBE