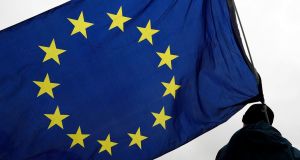 The commission’s agenda is seen as ambitious and is thus likely to meet resistance. Photograph: EPA

The EU needs to seize the opportunity of the economic upswing to complete the task of building economic and monetary union, the European Commission insisted on Wednesday.

“We need to make the euro weatherfast for the future,” budget commissioner Guenther Oetinger told journalists at a press conference in Brussels.

With EU leaders set to debate the euro’s future at a special euro summit next week, the commission has set out for them an ambitious agenda of reforms of the currency’s institutional architecture and new financial instruments. Its purpose, commissioner for economic affairs Pierre Moscovici said, to enhance “the unity, efficiency and democratic accountability” of the currency.

Most ambitiously the commission proposes turning the EU’s sovereign bailout fund, the European Stability Mechanism, created during the financial crisis to assist in bailouts in Greece and Ireland among others, into a European Monetary Fund (EMF) with wider powers. A “robust crisis management body”, the commission says, with an overall lending capacity of €500 billion.

Its expanded role assisting member states in financial difficulty, notably protecting investment programmes during downturns, would also see it providing a financial backstop for the Single Resolution Fund and acting as a lender of last resort to facilitate the orderly resolution of distressed banks.

Over time the EMF could develop the capacity to act as a stabilisation fund for the euro area to cushion individual states or groups of states against asymmetric shocks.

The commission was coy about the scale of such a fund but, mindful of German concerns, insisted that it would not be involved in “permanent fiscal transfers between member states”. The budget would have to be negotiated in the context of the 2020 budget discussions, Mr Oetinger said, noting that the current EU budget ceiling of one per cent of EU GDP “isn’t going to work anymore.”

Member states had to understand, he said, that it would be far cheaper to increase the budget ahead of the next crisis than face it unprepared.

Among other measures proposed by the commission is the appointment of an EU finance minister who would serve as a bridge between the informal eurogroup of member states, which they would chair, and the commission on which they would also serve. It is a “doublehatting” between the institutions representing member states and the union’s executive akin to the EU’s high representative for foreign affairs.

Unlike traditional finance ministers the new role would not involve controlling a budget but would be responsible for steering the budgetary coordination and surveillance system between member states under the EU’s “semester” system. The new minister would be accountable to the European Parliament in a way that the current chair of the eurogroup is not.

The commission has rejected the ideas of a separate budget or parliament for the euro’s 19 members, preferring to incorporate the management of the currency’s affairs into “community” institutions. The new funding mechanisms would also be available to non-euro states and the commission proposes doubling the “convergence assistance” and technical support available to those preparing to join the euro. Croatia and Bulgaria are specific immediate targets.

The incorporation into EU law by means of a directive of the substance of the 2012 “Fiscal Compact” is also proposed. The treaty, which reinforces mutual budgetary surveillance, had been signed by 27 member states outside the EU framework after the surprise veto by then British prime minister David Cameron.

Although there is general agreement among member states that the institutional architecture of the euro needs beefing up, and some sympathy for the idea of a fund like the EMF, the commission’s level of ambition means that its proposals are unlikely to go through smoothly.

Net budget contributors, such as Germany, Finland and the Netherlands in particular, have strong concerns about what would be seen as their taxpayers bailing out other states, while some states view the commission’s move as a power grab by it from the, albeit informal, intergovernmental eurogroup. MEPs will broadly welcome an increase in their supervisory role over a policy area that has been beyond their reach.