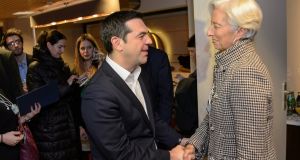 The International Monetary Fund has reiterated its call for debt relief for Greece, raising pressure on European countries to cede to Greek demands for debt re-profiling.

In a statement released in Davos following a meeting between Greek prime minister Alexis Tsipras and IMF managing director Christine Lagarde, the Washington-based fund said it was ready to support Greece but only if it was granted “significant” debt relief by its European partners.

“The managing director reiterated that the IMF stands ready to continue to support Greece in achieving robust economic growth and sustainable public finances through a credible and comprehensive medium-term economic programme,” the IMF said in a statement issued on Thursday in Davos.

“Such a programme would require strong economic policies, not least pension reforms as well as significant debt relief from Greece’s European partners to ensure that debt is on a sustainable downward trajectory.”

Concerns about the global economy continued to occupy minds at the World Economic Forum in Davos yesterday. In one of the first sessions of the day, European Central Bank chief Mario Draghi reasserted his willingness to act if needed to stimulate the euro zone economy, a day after the ECB surprised investors by signalling possible action in March.

“We have plenty of instruments and especially we have the determination and willingness and capacity of the Governing Council to act and deploy these instruments,” he said.

The ECB’s comments appeared to sooth investors, with Japan’s Nikkei and the main European stocks rallying strongly yesterday following the equity rout earlier in the week.

Mr Draghi was not the only central banker in attendance at the forum yesterday.

Bank of Japan governor Haruhiko Kuroda played down the prospect of global market turmoil in an interview with Bloomberg. The central bank governor, who is due to address the forum today, said he did not believe China faced the possibility of a hard landing, adding that he was “relatively optimistic” about its prospects.