Trump not due until Friday, yet imminent presence already felt 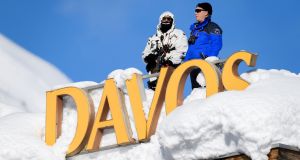 Swiss armed security personnel on the rooftop of a hotel in Davos on the opening day of the World Economic Forum. Photograph: Abrice Coffrini/AFP

The skies over the Swiss Alps cleared on Tuesday after the biggest snowfall in the 48-year history of the annual World Economic Forum in Davos.

As snow pelted down for a sixth day on Monday, burying Europe’s highest town 1,560m above sea level in six feet of snow, many executives were forced to abandon their usual limousine rides for packed trains to make it to Davos ski resort.

It was enough to send media figures from India into a frenzy as they demanded updates on a WhatsApp group on prime minister Narendra Modi’s whereabouts and timings. “PM has reached Davos,” the group was informed just before 6pm. Crisis averted.

The leader of the world’s largest democracy and second most populous country was to have been the main draw of the four-day event – following Chinese president Xi Jinping’s show-stealing appearance last year, where he delivered a passionate defence of globalisation and free trade.

That was before US president Donald Trump decided this month to gate-crash the party, and become the first sitting president to address the Davos pow-wow since Bill Clinton in 2000.

While Trump is not due to turn up until Friday, his imminent presence is already being felt.

“Jaws dropped because this wasn’t seen as his crowd,” said David Rubenstein, co-founder and co-chief executive of US investment giant Carlyle, on a panel discussion as he recalled Trump’s surprise move to attend the event.

Modi was much more to the taste of the 3,000 business leaders, politicians, academics and social advocates – the much pilloried “global elite” – attending the conference.

He warned of a “worrying trend” against globalisation towards isolationism, and arguing that the world was not doing enough to tackle climate change. (That was after audience members scrambled for their translation headsets, having been caught off-guard when he spoke in Hindi).

Trump, who, according to a Washington Post report this week, likes to imitate Modi’s accent, sent a pre-Davos message of his own on Monday by signing a measure imposing tariffs on large imported washing machines and solar-energy panels.

Harvard economics professor Kenneth Rogoff reckons Trump will demand that business leaders pay him homage when he speaks on Friday. After all, US equity markets are routinely scaling new highs these days, and the global economy is almost running on all cylinders.

Indeed, the early sessions of the Davos gathering have been dominated by hand-wringing about potential risks rather than, as often in the past, dealing with a live unfurling crisis.

Rogoff’s said he expected Trump to say: “A lot of you may not like me, but if you look at your wallets you should love me.”

Canadian prime minister Justin Trudeau shied away from overtly offending his nearest neighbour when he addressed the forum on Tuesday night, focusing on favoured topics such as corporate greed and gender equality.

“Too many corporations have single-mindedly put the pursuit of profit before the wellbeing of workers, and the gap between the rich and poor is staggering,” said Trudeau, adding that companies boost profits by avoiding taxes and undercutting workers, which is unsustainable.

It played to the Davos theme this year of “creating a shared future in a fractured world”, and was lapped up by his audience – many of whom failed to make the connection that he was holding a mirror up to them.

While many delegates fear they will be moving more uncomfortably in their seats when Trump makes his address on Friday, Rubenstein is more circumspect.

“I think he wants to convey that he’s not the ogre that he has been portrayed [as],” the Carlyle boss said. “I don’t think he’s coming to castigate.”