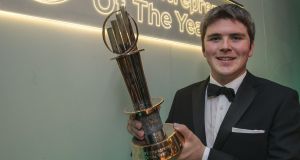 Stripe co-founder John Collison (pictured) and his brother Patrick were added to the list of Irish billionaires last year, according to a report by Oxfam. Photograph: Dave Meehan

A record surge in the number of billionaires globally last year, when one was created every two days, has fuelled an “inequality crisis”, according to Oxfam in a report published ahead of the World Economic Forum conference in the Swiss ski resort of Davos this week.

There are now 2,043 dollar billionaires worldwide, while the 3.7 billion who make up the poorest half of the world saw no increase in their wealth last year, the report outlined.

The remaining six members of the Irish billionaires club are Indian construction magnate Pallonji Mistry, who holds Irish citizenship and is worth $14.3 billion (€11.7 billion), and US-born Lone Star Funds owner John Grayken, who obtained Irish citizenship in 1999, and is worth $6.6 billion (€5.4 billion), according to data published by Oxfam alongside its report. Telecoms businessman Denis O’Brien, Dublin-resident Campbell’s soup heir, John Dorrance, financier Dermot Desmond and Glen Dimplex founder Martin Naughton complete the Irish list. The eight Irish billionaires on the list have a combined wealth of €34.2 billion, the charity said.

The richest 1 per cent continue to own more wealth than everyone else on the planet combined, while a global network of tax havens, as underscored by the Panama and Paradise Papers in the past two years, are helping the super-rich hide at least $7.6 trillion (€6.2 trillion) from tax authorities, the report, titled Reward Work, Not Wealth, said.

In addition, nine out of 10 billionaires globally are men, it said.

“The billionaire boom is not a sign of a thriving economy but a symptom of a failing economic system,” said Jim Clarken, Oxfam Ireland’s chief executive. “The people who make our clothes, assemble our phones and grow our food are being exploited to ensure a stable supply of cheap goods, and swell the profits of corporations and billionaire investors.”

The report comes as members of the so-called global elite, including political and corporate leaders, attend the annual World Economic Forum in Davos between January 23rd and 26th, under the umbrella of a theme of “creating a shared future in a fractured world”.

The Oxfam report outlines that investors and corporate bosses are seeing their wealth rise at the expense of workers’ rights, and as big business has an “excessive” influence over policy-making.

Mr Donohoe will appear on a panel on Thursday that is set to discuss how global tax avoidance can be stopped.

A report published by Credit Suisse last year showed that 33 per cent of Ireland’s wealth is concentrated in the hands of the country’s wealthiest 1 per cent, compared to almost 32 per cent for Europe as a whole and 50 per cent for the world.

“Even billionaires who have made their fortunes in competitive markets are often doing so by driving down the wages and conditions of their workers, forcing countries into a suicidal race to the bottom on wages, labour rights and tax giveaways,” Oxfam said. “At the same time the poorest children, especially the poorest girls, are condemned to die poor as opportunities go to the children of richer families.”