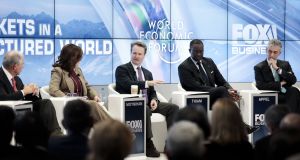 Senior business leaders clashed on the first day of the World Economic Forum conference in Davos over the impact of the United States’ tax overhaul on the world’s largest economy, as the International Monetary Fund used the reforms as a key reason to upgrade its global growth outlook.

Speaking on a panel titled “Global Markets in a Fractured World”, Stephen Schwarzman, chief executive of investment management giant Blackstone, said that an “underestimated” impact of the US tax reforms is that it will encourage overseas companies to move activities to the country.

The focus to date has been on the impact of US companies such as Apple repatriating cash on the back of a one-off 15.5 per cent rate as reforms signed into law by US president Donald Trump late last year cut the main corporate rate to 21 per cent from 15 per cent.

“Leave aside bringing cash home. Non-US people view this as a very big deal,” said Mr Schwarzman. “I think were going to find a very positive surprise [as businesses are saying] they are going to do more things in the United States. ”

However, Frank Appel, chief executive of Deutsche Post DHL, said he believed the US tax reforms, taking money out of government coffers, will lead to higher budget deficits.

“You can’t reduce tax if you have huge deficits,” Mr Appel said. “The tax reform in the US will be good short-term but it doesn’t fix the problem.”

He pointed out that in Europe, Ireland, Portugal and Spain have reformed their economies and fiscal imbalances, which is “really paying back” and boosting the competitiveness of these countries.

When asked if the US reforms amount to little more than a “short-term sugar high” for the US, Mr Appel said: “I think so.”

However, Mr Thiam said the US is in a “unique” position in that the “rest of the world is very happy to finance the US deficit”.

“I’ve learned over time not to bet against the US economy,” Mr Thiam said. “It’s not a winning strategy.”

Ms Friedman said that a more competitive US tax regime should drive employment, productivity and, in turn, government revenues, which should “address some of the budget deficit”.

Inflation at near five-year low as consumer activity remains muted 11:48
‘Worst is behind us’ but recovery will be slow – Bundesbank economist 11:44
Another Perfect Day for Cork as animal-free dairy goods company raises $160m 11:33
NTMA raises €1.5bn mainly at negative rates 11:06
Jysk Ireland to merge with UK business as it seeks further growth 10:48